How Glanders in Germany Has Affected Global Equine Transportation 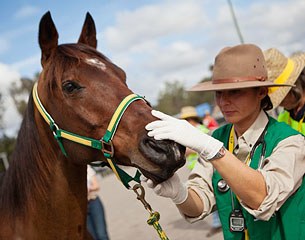 The upsurge of the equine disease glanders in Germany has resulted in special quarantine and exportation regulations for global horse transport  What is this disease and what are the ramifications this incident  has on the international equine export and import market? A large amount of conflicting information is being published about the glanders positive or negative situation in Germany. Let's explore:

Glanders and the First Reported Case

Equine veterinarian and European specialist of the College of Equine internal medicine Lidwien Verdegaal DVM reported the first ever case of Glanders to the Kuwait National Government when she was working in the country as an equine specialist.

“Glanders (Burkholderia mallei) was taught us to be an ancient, non-European disease when I studied at Faculty of Veterinary Science in Utrecht,” says Lidwien. "This first case that I reported was in Kuweit, followed by more cases during my three years there and in the Middle East."

Typical signs of glanders are mainly divided in three forms: a cutaneous (skin) form, an (acute) nasal form and a pulmonary (respiratory) form. The horses show signs of skin nodules spread over the body and/or limbs which will eventually form abscesses or ulcerate with discharge. Horses often have mucopurulent (yellow/ greenish) nasal discharge and may cough. Horses may have chronic disease only showing signs of weight loss and an occasional cough or may not show any signs at all (similar to the recent case in Germany).

According to Lidwien what makes Glanders so dangerous is that it is a bacterial zoonotic disease which means it can be transferred from horses to people and cause severe disease in humans.

“Treatment and recovery of human Glanders disease may be difficult and it is currently still registered as a potential biological weapon," he added.

Feeling that export but also import restrictions are necessary to prevent the spread of the disease, Lidwien advises that particular caution must be taken in chronic cases or a case which only carries the bacteria without showing any clinical signs.

“Carriers are the risk factors of spreading the disease. If we don’t test, we won’t know if they are carrying and spreading the bacteria and as glanders is a notifiable disease it needs to be reported to the National Government and World Organisation of Animal Health; following this procedure, unfortunately horses need to be humanely destroyed," he explained.

Lidwien advises that prevention mainly involves import and export restrictions; countries won’t be able to export horses until all horses are tested free of the disease. Prevention within a country: transportation and strict biosecurity rules in relation to prevent contamination since bacteria survive in food, water, on equipment and tissues for about a month.

Informed that the Australian Biosecurity Department had issued a six month pause of horse export from Germany, the ban also includes frozen semen. Lidwien feels these measures are important to prevent a deadly spread!

“I think the recent case shows clearly the risk, it is still unknown how this horse got infected. There doesn’t seem to be a direct contact with an infected imported horse and the horse has not travelled. It was a healthy looking horse while carrying and potentially spreading the bacterial disease.”

Guido Klatte from the biggest global shipping company in Germany has been transporting horses worldwide for almost 30 years. Klatte says that some countries request a blood test for Glanders before export out of the EU. “In a recent case a horse which was supposed to be shipped overseas returned a positive blood test. The horse was re-tested positive in the blood test, but did not show any clinical signs or symptoms at all,” Guido explained. “As a precaution, the authorities decided to cull and section the horse on 13 December 2014 and there were no findings in the muscles or organs of the horse which confirmed that the horse was healthy and not sick with glanders."

According to Guido the disease was not confirmed in the horse and all other horses on the premises were tested negative three times. Lidwien, however, says that his contact in Germany has confirmed the horse was humanely put down and the samples were positive. The complement fixation test (CFT) is sometimes falsely positive, but this horse had also a Western Blot and PCR positive test. Guido replied that it seems like a false positive case, as the horse was not sick, nor did any other horse become infected, but he added that right now some overseas countries are on hold which means they are currently unable to export to them.

“Hopefully the officials will publish a statement soon, that there was just the one individual, isolated subject and no other horses were found positive around the history of the horse and no epidemic occurred whatsoever. Upon that, overseas countries should recognize Germany with its previous status as free of glanders," Klatte believes.

Guido says that he is not worried about the disease as he is adamant that Germany does not have it. In his opinion the source for the positive blood result may only have come from an extern item directly on the particular horse – or eventually it could possibly be a cross reaction with some other sort of bacteria or similar which might not even be known or researched yet.

“Through our years of shipping experience we have lived through many false positive results in different diseases. Binding reasons could mostly not be given," he stated. “As a precaution we are already testing each horse designated for overseas transport at their stables of origin before they are brought to our stable for quarantine or onward travel to the airport. For the moment, we test each horse that is to be exported overseas for glanders even if it is not a requirement of the destination country.” 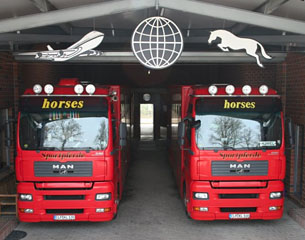 In general, Guido states that it is very good that our country is so alert and organized to immediately ‚jump‘ on a hint of a reportable disease and undertake enfolded measurements.

“The immediate international notification caused some handicaps for exports to overseas countries which hopefully will be repealed very soon," Klatte added. "Upon the proof that there was no infectiousness, no National nor European restrictions were implemented. Horses were and are still free to travel across Germany and all of Europe.”

To get to the bottom of the question, one needs to find out if the Glanders case was confirmed or not.  Dr. Mandy Elschner, Head of the Reference Laboratory for Glanders at the Federal Research Institute for Animal Health in Germany, was in charge of testing the horse in question.

“The affected horse was born in May 2008 and held in a horse population in the Federal State of Lower Saxony (Niedersachsen), Germany," Mandy explained. "A blood sample has been taken for export purposes to a Third country to perform a routine test for glanders. The horse showed no clinical signs and has been kept separately from other horses during the pre-export quarantine. The complement fixation test showed a positive result (regional laboratory); the Friedrich-Loeffler-Institut (FLI) OIE and National Reference Laboratory for Glanders) confirmed the result and revealed also a positive result with the immunoblot method. A second blood sample was taken and the results of this investigation confirmed the first results."

However Mandy added that after the affected horse was euthanized for diagnostic purposes and the pathologically revealed no typical glanderous lesions. 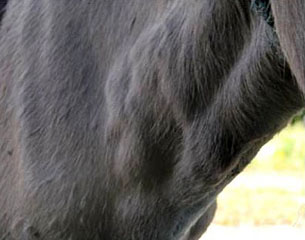 In order to control the spread of the disease the affected stable has been put under immediate restriction following the first serological positive test and Mandy says that all other equines of the affected barn have been investigated three times every two weeks with negative results.

“Cleansing and disinfection of the affected holding has been carried out. Epidemiological investigations have started with the help of FLI. It is known that the affected animal had never been moved outside of Germany. There might have been indirect contacts to South America. Further investigations showed that these suspicions could not be substantiated. Investigations of equines kept in contact holdings in other German Federal states yielded negative results with regard to an infection of B. mallei. The source of infection is still unknown.”

The impact of this, according to Mandy, is that Germany has lost its status “free of Glanders” resulting in alteration of import conditions or import restriction for horses or horse products to other countries. However at present the infection with B. mallei has been resolved as of 27 January 2015, while epidemiological investigations are ongoing.

“If your horse has resided in Germany at anytime from the 26th November 2014, it must reside in another approved country for six months or await the suspension to be lifted,” said Chris. “In good news for IRT clients, IRT has an approved quarantine station in the United Kingdom. This means IRT can continue to offer flights from the UK to Australia for horses that have resided in European Union countries other than Germany. You also have the option of residing your horse in another approved EU country other than Germany for six months before flying to Australia from the UK.”

Kuwait, the first country to host the disease, has only just became free of the disease a few months ago. Lidwien says the outbreak carried on for approximately seven years and the country was closed for horse import and export for all those years!