Paulinda Friberg and Di Lapponia T Storm to the Top 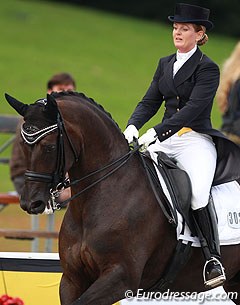 Setting her sights on the CDI-W Den Bosch in March and then hopefully the 2015 World Cup Finals in Las Vegas, Paulinda Friberg took a double fifth in the Grand Prix and Kur at the 2015 CDI-W Gothenburg on 27 February - 1 March 2015. The dynamic Swedish rider and her beautiful black mare are storming to the top in Sweden, making them clear team contenders for the 2015 European Championships.

Paulinda was incredibly happy with her 14-year old black mare Di Lapponia T (by Donnerhall x Argument) after Gothenburg as the duo produced scores of 71.300% and 76.925%.

“In the Grand Prix I wanted to give her a good experience, so the test was safe but with no real highlights,” Paulinda told Eurodressage.  “In the freestyle I decided to ride with more energy and we had a top score again. It was only the second time I have competed with this Freestyle there are still a few things to change with the music.”

Paulinda is Di Lapponia T’s only rider ever and she says she knows the mare very well. A bad fall off a young horse in the spring of 2014 did not rattle her confidence on the more experienced Grand Prix mare. “She always fights for you," she stated.

Bred by Joachim Tobaben in Buxtehude, Germany, Di Lapponia came directly from the breeder. Paulinda bought the black beauty from Tobaben, when she was two and a half years old.

“She was a broodmare in my stable first, and I started to ride her when she was seven years old. She has only been under saddle for seven years now," said Paulinda. Di Lapponia produced the 2006 born Dilissima (by Topaasch), who gave birth to four offspring: in 2010 to Di Fantastica (by Faustinus), in 2012 to Di Fiorella (by Floricello), in 2013 to Fiorello (by Floricello) and in 2014 to Fratello (by Floricello).

Friberg labels the mare as a very ambitious horse. She claimed she is very well behaved, and describes her behaviour as that of "a dog".

"She's easy to handle, she knows a lot of worlds and she knows she is a diva and she loves attention," the rider added.

Working as a professional hairdresser, the 42-year old Paulinda has five horses in her stable and trains with Kerstin André who lives close by.

“I also train with Jonny Hilberath, both in Sweden and in Germany. My goal for this year are the European Championships in Aachen. Now that I've got a wildcard for Den Bosch maybe I will get enough points to head to Vegas; who knows?”