Silvio I Passed Away 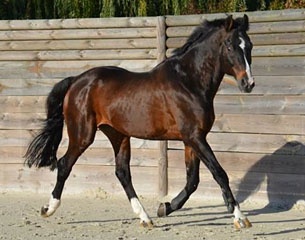 The Oldenburg breeding stallion Silvio I has passed away at age 28 on Wednesday 18 March 2015. The bay stallion was known as a versatile producer of show jumping and dressage horses, even though the stallion was more used as a jumper stallion.

Silvio I was by Sandro out of Gelbkatze (by Gepard x Ballyboy) and born in 1987. Bred by Paul Schockemöhle, the bay stallion was Oldenburg approved and did his Stallion Performance Test in Adelheidsdorf in 1990. He finished 7th out of a group of 70 (!) stallions with an overall score of 121.50 points.

Silvio I stood up for stud in Germany, the U.K. and in 2013 he sold to Haras des Princes, France.

Besides Sir Lui, Silvio's most successful dressage offspring was the Oldenburg premium stallion Sterntänzer (by Silvio I x Pik Bube I x Marlon xx), which competed at the Bundeschampionate finals three times and twice finished fourth under Katrin Burger. In 2012 the stallion sold as a 12-year old to Denmark.

Related Links
Sammy Jo, Hanoverian Mare of the Year 2012
Weltstar and What a Feeling at the 2000 Bundeschampionate
Wim Verwimp loses Zuuthoeve stallions to Philippe Jorissen