Cathrine and Cassidy, Journeying to Grand Prix Together, Reaping the Fruits at 2015 CDI Odense 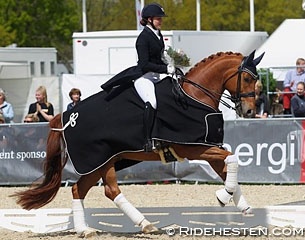 The double European Young Rider champion Dufour stayed away from international competition for two years as the pair learnt the Grand Prix movements together under the supervision of their long time trainer Rune Willum. After a one year international show break, the pair made its CDI come back in Falsterbo in July 2014 and then waited until April 2015 to reappear at the CDI Nieuw en St Joosland. Odense was only their third Under 25 CDI. Dufour is using the Under 25 division as the perfect bridge towards senior Grand Prix.

"I’m very happy about our success in Odense," Cathrine told Eurodressage. "I think it has been very nice to compete in these Under 25 competitions while we find our rhythm. My horse Cassidy is very sensitive and that's why it can sometimes be a bit difficult to keep him calm during the tests."

While the 23-year old Cathrine has been enjoying the journey to Grand Prix, there were times during the past year when she doubted whether her Caprimond x Donnerhall offspring could go all the way.

“We didn't have the money to buy a horse like Orthilia, so when she had to go away I was happy to follow her with a rider as skilled as Fiona, and I'm wishing the pair all the best," Dufour replied when Eurodressage asked about her sentiments towards Orthilia's stellar rise on the show scene.

Cathrine is trained by Rune Willum at her own barn in Roskilde. She has pushed back her course in Leisure Management as she is kept very busy running “Dufour Dressage”.

“My plan for this year is to make Cassidy stronger and compete in some CDI’s later in the year," said the level-headed rider.