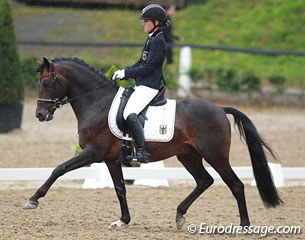 The 2014 European Championship German Team pony De Long has been sold to the Merkt family. The 9-year old bay stallion will continue his career with Philipp and Lena Merkt.

De Long is a 9-year old German Riding Pony stallion nred by Susanne Olnhoff. He is by HB Daylight of DS Roxy Brice (by Brillant).

The talented bay FEI pony stallion was previously owned by Sabine Olnhoff and Anja Nehls. Under Lea Luise Nehls the pony made his international show debut at the 2013 CDI Stadl Paura. He also competed in Brno Babenhausen and Zakrow in 2013. In 2014 the duo showed in Drachten and Vierzon. They were 8th at the 2014 German Pony Championships. 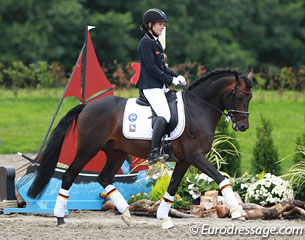 The pair represented Germany at the 2014 European Pony Championships in Millstreet, Ireland. The duo won team gold and finished 6th in the individual test and 5th in the Kur to Music.  The duo did their last international at the CDI Zakrow in November 2014. They were trained by Fee von Damman.

De Long has moved to Stable Hirtenhof in Aach, where the Merkt family keeps its horses. The pony will be trained by Katrin Burger and will be the riding partner for their 13-year old son Philipp and 10-year old daughter Lena.