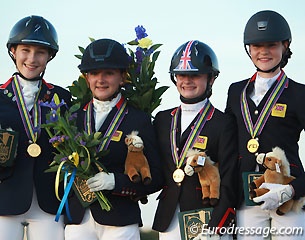 The 2013 European Pony Champion Phoebe Peters is on top of her game and secured the team gold medal for Team Great Britain at the 2015 European Pony Championships. The British team consistently produced seventy percentage marks, but it was Peters' whopping 79. that made all the difference and took them from a bronze medal spot to gold. Germany earned silver and an amazing Danish team landed bronze.

The Team Championships test concluded on Thursday noon 6 August 2015 on Ribersborg beach in Malmo, Sweden, with Phoebe Peters and her 13-year old German bred SL Lucci (by Lukas) reigning supreme. In the absence of her biggest rival Semmieke Rothenberger, who opted to compete at the 2015 European Junior Riders Championships this year, Phoebe freewheeled to victory with a top notch test that could hardly be faulted.

The halt at entry was a bit stretched with the hindlegs out, but the extensions were floaty, the traversal movements cadenced, the extended walk excellent with three hooves overtrack and the canter work on the dot. Throughout the test, SL Lucci did not put a foot wrong and stayed up in the bridle and soft in the contact. Peters rode every single movement for a top note and received 80.077% from the judges' panel, which included Christensen (DEN), Ebert (GER), Sanders (NED), Wessels (GBR) and Jena (SWE). Peters' marks did show large discrepancies even though she placed first with all judges; Sanders had her at 82.949% as high score and Jena at 76.154% as low score. 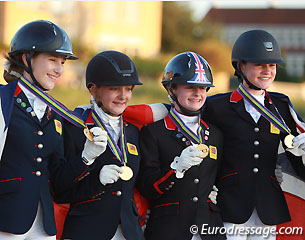 The almost full 5% point advantage of Peters on the second placed rider launched Team GBR straight into the gold medal position after the other three team riders had already secured a bronze medal spot. The second Brit to ride on Thursday was Rebecca Bell on the 12-year old Valido's Sunshine (by Valido). The duo ended up putting Britain's third best score on the board with 71.077%. Their team total was 222.718% for a historic team gold medal!

Team Germany finished in silver medal position with 222.128 points. It was staggering to witness how the German camp seemed to mourn the loss of gold with hardly any cheering ringside after Germany's top score of 75.769% appeared on the board instead of celebrating a silver medal won. Nadine Krause and her 9-year old Cyrill (by Champion de Luxe) were the last pair to go and kept the race for team medals exciting. 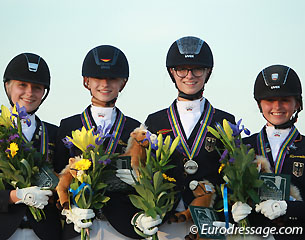 Krause and Cyrill began with a square but stretched halt and a very scopy but hurried for trot extension. The traversal movements were very lightfooted but the half pass left could have been more regular in the rhythm. The second trot extension was fabulous. In walk the pony blocked in the right turn on the haunches and in the extended trot he definitely needed to stretch the neck more despite the two hooves overtrack. Krause could have shown more collected walk before the trot strike off. The pony produced good walk in the simple changes and was very balanced in all the canter work.  The final halt was almost a sliding stop with again the hindlegs parallel but out from under the body. Cyrill was very consistent in the contact and steady in the head-neck position.

Germany's second highest score came from team newcomer Lana Raumanns on the 13-year old Den Ostriks Dailan (by Leun's Velds Lord). The pair finished sixth overall with 73.462%. This pony also halted squarel but without taking the weight on the hindlegs. The shoulder in left was hurried and the pony lost scope and suspension in the lateral movement. The cute chestnut often tilted the head in the trot work but produced good walk pirouettes. The compact Dutch Welsh pony easily produced three hooves overtrack in the extended walk. The canter work was very secure with good balance and uphill striding. One simple change could have had a better walk and sometimes the pony could remain more supple over the back in each canter stride. Overall Raumanns rode a smart test at her first European championship. 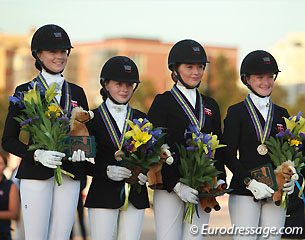 The Danish team finished in the bronze medal position with a 221.333 point total, just 1.4% short of gold. The Danish team led after day one and its two riders on Thursday - Sara van Deurs Petersen and Karoline Rohmann - only upped the ante. Without taking Germany and Britain's team starlets Krause and Peters into consideration, the Danish riders were the most consistently best scoring team in Malmo with a third, fourth and fifth place in the team championship test. They certainly were the gold medal winners of the heart today!

Sara van Deurs Petersen and the 12-year old Farbenfroh (by Farewell I) spearheaded the Danish campaign and probably rode the second best test of the day, second best because of one big booboo. Maybe her not-so-famous name kept the scores from climbing higher?!  Van Deurs Petersen could easily have got more than the 74.128% that flashed on the board after her ride. Her marks ranged from 72.179% (German judge Ebert) to 76.923% (British judge Wessels). 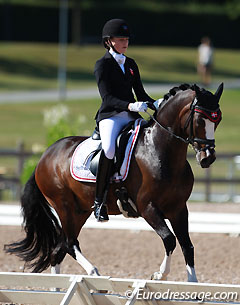 The dark bay Farbenfroh was nice and super soft in the contact throughout the test, most of the time with the poll as highest point. He moved incredibly balanced, with good ground cover and lightfooted also in the traversal movements. Unfortunately he broke into canter in the second trot extension and he lost a bit of impulsion in the right turn on the haunches; otherwise this pony's test was finger-licking good! The extended walk should have put straight 10s on the board and the canter work was outstanding with incredible balance in the right counter canter and good walk in the simple changes. The end halt was not entirely balanced on the right hindleg.

Denmark's second best score came from Karolina Rohmann on the 9-year old Adriano B (by De Angelo B). The duo began with a conservative first trot extension that needed to be more forward, but the compact chestnut kept a good rhythm in the traversal movements. The second trot extension could also have had more swing over the back. The extended walk was exceptional but in the walk pirouettes there needed to be a bit more engagement from behind. Rohmann rode a very safe test with accurate canter work and should up the bar in the individual test for a higher score. Today she earned 73.744% with her notes ranging from 70.513 (Jena) and 76.538% (Wessels). 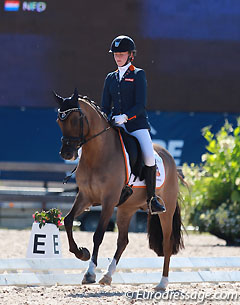 The Dutch team used to have a subscription to a podium place but this year the competition was fierce and the quality of the ponies and riding has improved so much in Denmark and Great Britain that The Netherlands were totally overpowered and bumped from a medal seat. They finished fourth with 213.590 points, more than seven percent short from bronze.

Holland's top rider was Eveline Bos on the 11-year old Valentino (by Dornik Double). The pair started with a wonderful halt at entry and good flowing trot work. The black gelding does not have the most expressive trot but Bos rode with good confidence and accuracy. The pony blocked in the right walk pirouette, though, and also in the left one the impulsion failed. In the extended walk the pony could have dropped more in the poll and the shoulder in right was less supple than the left one. Still, in the canter work Bos was able to ride each movement with good relaxation and concentration and the simple changes were lovely. Their 72.026% was a correct score with all five judges quite in unison. 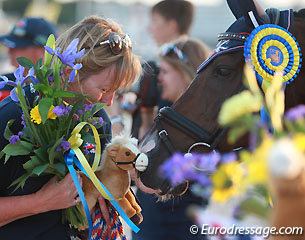 Daphne van Peperstraten and the 11-year old Don Camillo du Bois (by Dornick) certainly tried their best but in a field of such world class ponies, it is killing to have a mediocre walk. The cute bay gelding could not generate any decent overtrack in the extended walk nor did he develop much walk in the simple changes. In trot the pony regularly lost clarity in the rhythm, especially in the half pass left and bent lines, but the trot and canter extensions were big. Van Peperstraten managed to ride a balanced counter canter. The pair finished twelfth with 71.538%

Eurodressage's Astrid Appels was on the scene and took photos of all dressage riders . If you are interested in ordering prints, collages, photo albums or digital images, send us an email with your name at info@eurodressage.com