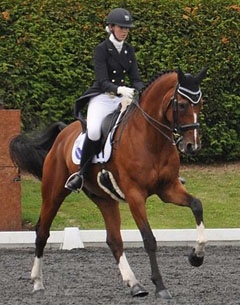 Pony rider Lara Kuropatwa, junior rider Anna Jesty, and young rider Gaby Lucas were the winners of their division at the 2015 British Youth Riders Championships held at Sheepgate equestrian centre on 24 - 25 August 2015. The British Under 21 Championships took place over two rounds with the combined results of the team and individual test counting for the overall ranking.

In the absence of the entire British pony team that competed at the 2015 European Pony Championships in Malmo, Sweden, Lara Kuropatwa and her 9-year old pony Mister Snowman (by My Mobility x Sierra) freewheeled to the title, scoring 73.72% and 70.55%. Lara says Snowy felt on top form throughout the show.

"Mister Snowman was imported as a four year old following the Bundeschampionat and he came from Timo Coldeway of Gestüt Kastanienhof,” said Lara. “He has a big personality!”

Turning 15 last week, Lara felt she had a good shot at the title in Sheepgate, particularly as Snowy was feeling so good. “I was even more delighted with my scores, a personal best in both the Team and the Kur," she added.

Lara is based at home in Wiltshire and her family has always had horses. Both her and her elder sisters were into dressage.

“Olivia was a Team medalist at the Pony Europeans, so I’ve really grown up with the horses. I was never pushed to do dressage, I think I really ‘caught the bug’, and I was lucky enough to have a schoolmaster FEI pony, Don Joshi.”

Training with Peter Storr for the past 5 years, the pair are currently working to keep on improving the overall way of going for both her ponies, Snowman and Le Chiffre, an 8-year old who is owned by Bev and Sam Brown.

“I also have a young horse that I’m training with Peter’s help and I hope to bring him out in Juniors in a couple of years time," she said. "I’m doing my GCSE’s next year and longer term I want to become a professional dressage rider.  I also want to continue with my studies and go to university, maybe in Europe, so that I can base myself at a training yard. My plans for next year are just to keep developing my ponies, and my skills as a rider- and obviously my main aim is the Pony European Championships.

Junior champion Anna Jesty said her 12-year old KWPN Aquiro (by Argentinus x Donnerhall) gave her an amazing feeling in both tests, and with scores of 72.57%, and 68.88% she was particularly happy, given the pair did make a few mistakes.

“He felt the best he has ever felt at Sheepgate, and even though there were mistakes in all of the tests he still pulled out some really good marks," said 16-year old Anna. “I bought him a year ago from Ben Andrews who was the rider at Half Moon Stud. He was training Advanced and had done a handful of Elementary and Medium tests over the three years Ben had him.  He came over from Holland as a 7-year old and was only working at Novice at the time. He is an extremely trainable horse with a great attitude towards his work and he constantly tries his hardest both at home and in competition."

Anna added that because of this they have to be careful not to take him out competing too much, so they usually aim for one a month to keep him fresh and willing.  The pair is coached by Bruce King at Platinum Stud and Claire Speer and they are currently working on getting “Gleavo” competing at Prix St George locally and then training him up to Grand Prix.

“I am due to start studying the AASE performance programme through Hartpury College at Platinum Stud. My dream is to one day compete at the top of dressage as a professional rider," said Jesty.

Young Rider title winner Gaby Lucas scored 69.67% and 70.26%, and as her horse Salo (by Sandro Hit) is only 7 years old,  she expects big things from him in the future.

“Salo was just amazing at Sheepgate, and having only been riding and competing on him a short time I feel it is the  first time we really clicked,” Gaby told Eurodressage. “I have only owned Salo since December when he was schooling at Advanced/Medium and in less than three months we were competing him at his first international at Prix St Georges. Salo is a very special horse and extremely talented. My biggest achievement so far with Salo was at Hickstead PL where we won the Prix St Georges with over 71%.”

Starting out in pony club, Gaby soon realised that it wasn't just going round in circles, and that there was a lot more to dressage, and so she started to compete seriously on her pony Topsey who was very cheeky and it didn't always go to plan.

“After a lot of hard work we started to do very well going from Preliminary to the pony Europeans in under three years. The best part of dressage for me is teaching the horses something new and when it clicks makes it all worth while," Lucas explained.

Lucas also placed second in the Young Rider kur with 70.20% on her older horse, 11-year old Zante (by Jazz x Flemmingh), who was her first horse after ponies. She says he was quite a bit step up.

“Zante is a very hot, sharp horse and he hasn't competed a lot yet but my highlight with him was competing in his first ever international abroad this year in Roosendaal. My routine with both horses is quite strict as I think horses really benefit from a reliable consistent routine. We start the day by feeding breakfast at 6:30am and then at 7am-3pm they  get turned out in the field individually.  They get feed a lunch feed in the paddock at 12:30. They then are exercised in the afternoon either hacked, schooled, jumped or lunged depending on the day. Their night feed is given at 5pm (their dinner) then a late night feed at 10pm.”

Gaby’s short term goal is to keep improving both horses in terms of strength and quality of work, and of course eep getting consistent scores above 70% internationally.

“I am currently training with Sarah Turner, and as Salo is still so young we are not pushing him, particularly as all the movements just come so easily for him," she said. "Our aim is to go to next years Young Rider Europeans and I would like to have Salo in the Under 25 Grand Prix in 2017!”