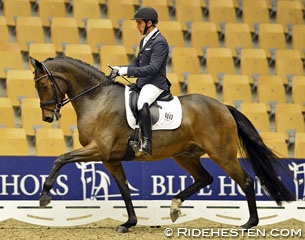 The 4-year old Rockson, the 5-year old Fiontina and the 6-year old Esperance became the grand winners of the 2015 Danish Young Horse Championships which were held at the 2015 CDI-W Odense in Odense, Denmark, on 14 - 16 October 2015. The Danish Young Horse Championships are open to all breeds, but it were the home bred horses, with German sires, that captured the champion's sashes. 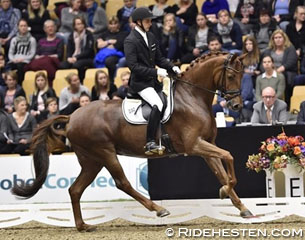 In the 5-year old division the reserve world young horse champion and last year's 4-year old Danish champion Fiontina, a Danish warmblood mare by Fassbinder x Romanov, scored the national title with an 8.980 total. The mare born by embryotransfer got 9.5 for trot and canter, 9 for walk for her stunning gaits and 9.3 for general impression, but the judges lowered the submission mark to 7.6 as the mare was ridden over tempo and with too strong a bridle contact. Blue Hors stud's head rider Daniel Bachmann Andersen took the silver medal aboard the Danish licensing champion Zee Me Blue (by Zack x Don Schufro) on a total of 8.700. The stallion scored 9.6 for trot, 8 for walk, 8.9 for canter, 8 for submission and 9 for general impression. Severo Jurado Lopez earned bronze aboard the KWPN licensing champion Franklin (by Ampere x Ferro) with a total of 8.660 points. The dark bay stallion got 9.4 for trot, 7.6 for walk, 9 for canter, 8.4 for submission and 8.9 for general impression. Remarkably absent from the Danish Young Horse Nationals was world champion Fiontini, the full sister of Fiontina. 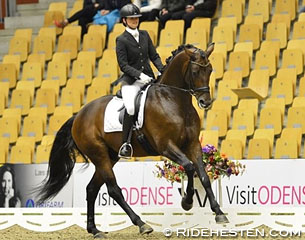