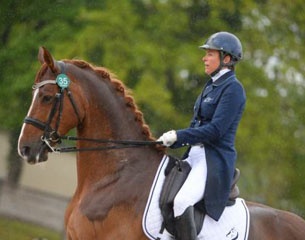 Nicole Favereau and her Grand Prix horse Ginsengue have been submitted to the French A-team, which is named Group JO/JEM in France in reference to a horse's Olympic Games and WEG team potential.

Ginsengue is a 9-year old Belgian warmblood mare by Welt Hit II out of Habile Fontaines OE (by Livingstone). She is owned by Nicole Favereau and her husband Jean-Marc.

The chestnut mare's competition career started in 2011 when she was a 5-year old. She was initially competed by Jean Marc and their two daughters Marine and Lara Favereau. In September 2013 Nicole took over the ride definitively. She placed 6th at the French Championships as a developing Prix St Georges horses.

The combination was first invited to the training seminars with team coach Jan Bemelmans at the end of 2014. At the beginning of 2015 they made their international medium tour debut in Saumur and Pompadour and in September 2015 they competed at international Grand Prix level with their first results at the CDI Saumur (64.400% - 66.902%). At the CDI Le Mans in October they scored 63.360% and 67.588%. So far they have contested 10 national Grand Prix tests.

Favereau is ecstatic that her mare has been added to it.

"I'm very proud that Ginsengue has been submitted to the group. She came to me when she was a 2-year old and my husband started her. She was a late bloomer," said Nicole. "I've always believed in this mare. She has a lot of charisma and is very willing to work. She has this air of ease. She's magic. We still have much room for improvement with this 9-year old mare."