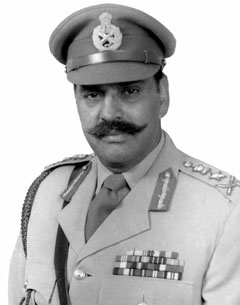 General Malhotra was President of the Equestrian Federation of India (EFI) for almost nine years. A keen sportsman, his contribution, guidance and dedication to the sport will always be remembered by the equestrian community.

General Malhotra retired after 40 years of distinguished military service in May 1981. He then went on to serve as the Indian Ambassador to Indonesia from 1981-1984 and was Governor of Punjab from December 1990 to August 1991.

“Equestrian society in Asia has lost a truly great friend with the passing of General Malhotra”, said Ho Nai Yue, Chair of FEI Regional Group VIII. “We really appreciate the impact General Malhotra has had on our equestrian community and the contribution he made over the years”, FEI President, Ingmar de Vos said. “The sport has lost one of its greatest friends, enthusiasts and supporters. He will be sadly missed, but his reputation will live on for generations to come.”

General Malhotra is survived by his wife Saroj Malhotra and two children. His son, Ajai Malhotra, an Indian diplomat, who has served as Ambassador of India to the Russian Federation, Kuwait, Romania and Moldova, and is a former Deputy Permanent Representative of India to the United Nations in New York.

A service was held for General Malhotra at Chinmayananda Mission, New Delhi on 1 January 2016.