Half Ownership of Springbank VH Sold to Andreas Helgstrand 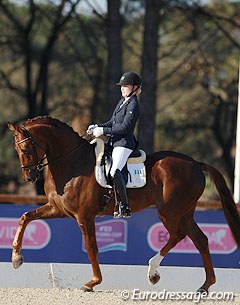 The liver chestnut Springbank VH was previously owned by Swedish Grand Prix rider Jeanna Hogberg in partnership with the majority share holder, breeder Tobias Hansson of Vastra Hoby Stud. Hogberg and Hansson now agreed to sell 50% of the ownership to Helgstrand, who will take care of the training, competing and marketing of the gelding.

Springbank VH has moved to Helgstrand's yard in Denmark.

"It is of course very regrettable that Jeanna Högberg and Springbank VH may not continue their successful compeeting career together," said Hansson. "During the autumn Jeanna and I together tried to find co-funding in Sweden and abroad. It is of course sad that such abilities are leaving the country, but we have good growth at Vastra Hoby stud."