The Million Euro Coup Video: The One Legged Trot Debunked 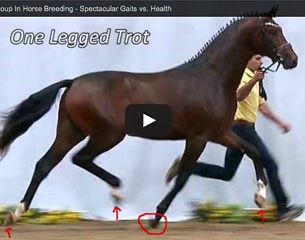 Recently a video titled “The Million Euro Coup In Horse Breeding - Spectacular Gaits vs. Health” has been circulating quite widely on social media. The short documentary questions the impact of modern day breeding on horse health as overly extravagant movement is preferred in young horses today at licensings, auctions and competitions.

Eurodressage set out to talk to the author, Barbara Schulte, who published "Vom Fluchttier zum Desingnerpferd" (From flight animal to designer horse) in 2012, as well asbiomechanics expert Dr. Hilary Claytton, to further discuss the theory behind the video.

Barbara began her career as a newspaper journalist in 1971 and it was during that time that she had the opportunity to monitor the deliberate changes in the breeding of the Hessian Horse.

“This type of Warmblood was bred for farm work. It was a very powerful horse, heavier than the average saddle horse, and very good for carriage driving, but also suitable for low level dressage and jumping," Schulte told Eurodressage. "But times had changed and due to mechanisation this type of horse was not wanted any more.  Therefore the breeders started to change the breed to a saddle horse on the basis of Hanoverian stallions. I was able to document this development and the changes in the breed for ten years and talk with the breed officials of the time.”

The One Legged Trot

After several years abroad Barbara began breeding with an excellent Hessen mare and paired her to what she believed to be the best Hanoverian bloodlines. At the time they had quite a lot of thoroughbred influence. In the late nineties Barbara was noticing an increasing alteration in the horses themselves and the way of riding and handling them.

“That caused me to quit breeding warmblood horses. I remembered my old love for the Lipizzan breed and together with my husband we started a Lipizzan stud. However, I was still interested in the development of Warmbood breeding as well as in dressage competition," she added.

In her video “The Million Euro Coup In Horse Breeding - Spectacular Gaits vs. Health”  Barbara begins by explaining that the trot is a two-beat motion, where the legs move diagonally and parallel but because of the need for spectacular movements in dressage, particularly in the front legs, breeding is being aimed at having thrust from the hind legs.  This “thrust” forces horses onto their front legs, and they therefore lose their natural motion.

Barbara says that this then leads to a ‘one legged trot’, where one foot is on the ground at any time, and this also causes the horse's back to become hollow. “We must,” Barbara stated, “stop breeding horses for thrust and hyper-moblity,” and for the benefit of horses “concentrate on carrying capacity and stability”.

FEI Dressage Committee member, O judge, and esteemed veterinarian Dr Hans-Christian Matthiesen says that the “Million Euro Coup” video is  a nice overview, but as in many other situations, it makes statements/rules/generalizations based on still pictures, which are not professional.

He adds that this way of thinking is not new. “It has been known for years and is called Diagonal Advanced Placement, DAP, described by several researchers, including Dr Hillary Clayton, who made a comparison study on dressage horses over the years.  Interestingly, there is no significant statistical proof of any kind of correlation between DAP and health problems," Dr Matthiessen concluded.

Dr. Clayton's first comment when asked to weigh in on the video was to agree that in order to evaluate any of these qualities of the gaits, the photos have to taken at exactly the correct moment. 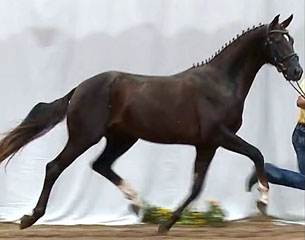 “Diagonal dissociation has to be evaluated at the exact moment when the first hoof of the diagonal pair contacts the ground. Unfortunately, this is not the moment that professional photographers usually publish.   Very often people show me photos with both hooves on the ground as proof that there is no dissociation but the photo has been taken too late to be useful for this purpose. The sinking of the fetlocks should be evaluated at the moment when the cannon bone is vertical since this is when the fetlock is lowest.”

Hilary added that the diagonal dissociation, that is referred to as "one-legged stance," is not as destructive as the commentary suggests. In fact it is beneficial to the horse's health.

“The hind hoof contacts the ground before the fore hoof because the horse is moving in a good balance with the haunches lower than the forehand so the hind hoof must contact the ground first. The diagrams show a horse in a more level balance so it is expected that the contacts would be simultaneous," Clayton explained. "When the fore and hind hooves contact simultaneously, the weight-bearing phases is initiated abruptly and concussion on the horse's legs is increased. When the hind hoof contacts before the front hoof, the legs act like the spokes of a rimless wheel - the horse rolls smoothly from one leg to the next. Horses that show this contact sequence are subject to less concussion and, of course, concussion is one of the main causes of arthritic changes in the horse's joints.”

According to Hilary the fore hoof stays on the ground longer than the hind hoof in the majority of trot strides and in order to see this you have to look at the exact moment when the hind hoof is leaving the ground - the time when you look at it is critical.

“The horse uses this terminal push with the front hoof to maintain an uphill self carriage and to avoid falling onto the forehand. The fetlock normally sinks to its lowest point when the cannon is vertical. The horses in the photos did not look hypermobile to me. Horses that truly have hypermobility of the joints, which is due to a collagen disease, more often show hyperextension of the knees. If you look at photos in Harry Boldt's book, for example on pages 76, 81 and 99, you will see horses with vertical cannons and low fetlocks. This is not a modern phenomenon. It is really much better to look at frame-by-frame video to see all these things," said Hilary

Hilary does agree on one point of Barbara’s commentary in that the fore and hind limb should swing forward and backward in synchrony.

“The horses that have a very expressive foreleg and a slow hind leg do not show this - they are incorrect. Also the hollowing of the horse's back is not a good thing," she added.

Hilary concluded that it’s actually not the extravagant trot that is to blame, but more that the solution to health problems from movements is more about finding good balance and even strides that allow the horse to move without tension or hollowing the back.

by Sarah Warne for Eurodressage