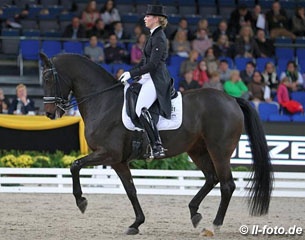 Barbançon suprisingly sold her number one Grand Prix horse Vitana V to South Korea through her trainer and horse dealer Andreas Helgstrand. The mare will be ridden by Yoora Chung. Korea is on a mission as Ha Kyung Song recently purchased Rudolf Zeilinger's yard in Emsdetten, Germany, as a training base for the 2020 Olympic Games in Tokyo.

"Vitana was always for sale when the right offer came," Morgan told Eurodressage. "I learned a lot with her and she gave the a lot of mileage and experience in the show ring. I'm so blessed to have had the opportunity to ride her and learn from her. I wish she will bring her next rider as much as she brought me."

The 14-year old Dutch bred mare by Donnerhall x Hemmingway was bought by the Barbançon family from horse dealers Nico Witte and Andreas Helgstrand in February 2014. The pair rode its Grand Prix high score of 72.300% at the 2015 CDIO Rotterdam.

The mare took over the number one spot in her stable from Painted Black when he was retired. Nadine Capellmann's Grand Prix schoolmaster Girasol was acquired in 2015 and will continue to be the lead mare for Morgan's GP career.

After Vitana V has left for Korea, Barbançon bought the 6-year old Dutch warmblood mare Faximiliana (by Ampere x Ferro) who was the 2013 KWPN reserve mare champion. Morgan's coach Andreas Helgstrand acquired the mare as a 3-year old. Under his assistant trainer Emma Ahlberg the mare finished 8th at the 2014 Danish Young Horse Championships with a score of 8.380.