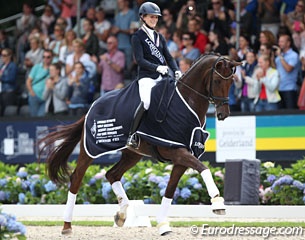 German Beatrice Buchwald and the Rhinelander mare Victoria's Secret became the winners of the 5-year old Finals at the 2016 World Championships for Young Dressage Horses in Ermelo, The Netherlands, on Saturday afternoon 30 July 2016. Victoria's Secret scored a whopping 95.00% for the title and gold medal. Quel Filou moved into silver medal position and Guadeloupe Beau secured the bronze.

After winning the preliminary test, the chunky powerhouse Victoria's Secret (by Vitalis x Fidermark) was the clear favourite for the title. The judges panel, consisting of Christensen (DEN), Hess (GER), Verbeek (NED) and Wessels (GBR), was eager to grant the talented mare the gold, even though her performance was less high quality than the test she produced on Thursday. Nonetheless Victoria's Secret, who is bred by Walter Schulte-Böcker and owned by Andrea Klüfer and Matthias Fieseler of Rhenania Pferde in Essen, Germany, has clear Grand Prix potential and was the stand-out horse of the day.

Victoria's Secret showed powerful and supple trot work that was very well carried even though she was not always 100% even in stride length. On the voltes she dropped in the poll. The extended walk was very clear but could have had more overtrack. The mare's canter work is outstanding but in the finals she could not show the same top quality canter as in the preliminary test. The mare struggled to keep the collection in the counter canter on the right lead, and on the left lead she came behind the vertical and lost some elasticity, relying on the rider's support. The trot on the long rein was outstanding though. However, it has to be noted that the liver chestnut mare was not so brilliant in the contact in the finals. She had the mouth tight and was not properly foaming like she did on Thursday. 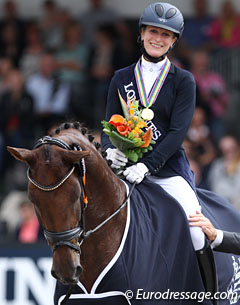 The judges awarded Victoria's Secret 9.5 for trot, 9.3 for walk, 8.9 for canter, 9.8 for submission and 10 for perspective. Wessels praised the mare for her "super balanced, elastic" trot with "lovely transitions".  It was surprising to see the judges score the submission with a 9.8 and praised her for the "beautiful connection" as the contact was not as ideal as it could be. Albeit, Victoria's Secret is oozing with Grand Prix talent and is a real horse for the future.

“I don’t know what to say, I have not fully grasped the meaning of it yet," Buchwald said at the press conference. "Of course I was the favourite after winning the qualification, but that really does not make it any easier, it actually creates more pressure. However, Victoria’s Secret is not only an intelligent horse, she is also a mare with a lot of go and always wants to work. We could have easily ridden another round here.” When she is asked about the future plans of the horse, Burchwald was uncertain. "The owner purchased her when she was a foal and now lots of people are interested. Hopefully we can find a party that can support us, so we can have a great future together. Because I would love to ride her again next year in the championships for six-year-olds in Ermelo.” 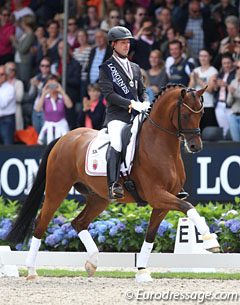 Schulz rode Quel Filou in a far better, more controlled tempo compared to the rushing in the preliminary test. He gave the horse the chance to truly express himself in the trot and show off his amazing scope and shoulder freedom. The bright bay regularly tilted to the left and lost some push from behind in the second extension. The walk had very good relaxation and rhythm. The canter was nicely uphill, also in the extensions but he lost some impulsion in the simple changes, yet the quality of rhyhtm was good. In the collected canter left Quel Filou could take a bit more weight on the hings legs. The connection could have been a bit steader in the canter work. Overall the horse has three very high quality gaits and needs to develop more strength and carrying potential from behind in the next year.

Sascha Schultz rode the bay to a fantastic score of 93.20%. The horse got 10 for walk, 9 for trot, 9.1 for canter, 9.0 for submission and 9.5 for perspective.   The judges praised Quel Filou for being "full of expression" and his "willingness to collect in canter"

“It was a true surprise for me to end up with a medal today,” said a proud Sascha Schulz. “ I am honoured to stand next to Victoria's Secret. I saw this combination and they are absolutely fantastic! On the first day, I was a bit too quick in the test, so today I tried to lower the pace a little. This worked very well. Quel Filou also loves people and loves to show himself, so he felt right at home here." 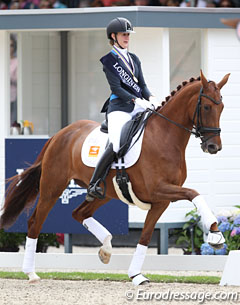 Kim van der Velden received a well earned bronze medal for her ride on the Dutch warmblood mare Guadeloupe Beau (by Bordeaux x Vivaldi). The refined liver chestnut mare, who could benefit from more musculature on her neck, is an elegant ballerina; extremely lightfooted in trot and active from behind. She lacked proper bending on the voltes and in the corners, but she showed a very clear differentiation between the working trot and the lengthenings. Also in walk, the mare had great overstep and good relaxation. In canter she was well balanced and forward thinking, but got quick in the rhythm and lost some carrying power behind. Guadeloupe needs to develop more swing and elasticity in the top line. The wonderful mare was totally unphased by her surroundings. She was dead quiet in the contact (maybe could have foamed a bit more), but her rider gave invisible aids and it was a very harmonious picture overall.

Guadeloupe Beau, who is owned by the Thai Pantapa couple, received a 9.4 trot, 8.8 for walk, 8.6 for canter, 9.2 for submission and 9.5 for perspective, to total 91.000%. The judges loved Van der Velden's "beautiful riding" and they praised "the transitions to medium trot and back."

World Championship debutant Kim van der Velden, who works as an assistant trainer for Frenk Jespers, was speechless. “It was amazing and I really did not expect to win a medal. It was special to do this in front of my home audience, with all my family and friends that cheered us on. I really enjoyed it.” 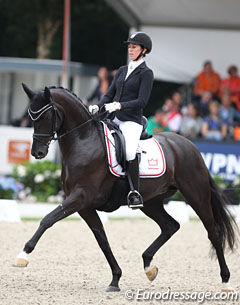 The biggest surprise of the day came from the first horse to go in the 5-year old finals, Danish warmblood mare Heiline's Danciera (by Furstenball x De Niro). Under Carina Cassoe Kruth the elegant black mare produced featherlight trot work, a good walk and a decent canter which lacked some roundness in the legs. The right extended canter was crooked. The judges panel seemed to have received a memo before the start of the class that big notes were needed to bring excitement to the day. When they started to announce the points of the first pair, jaws dropped to the floor. Not to say that Danciera is not a gifted horse, she certainly is, but in the end her marks did not separate her enough from the winner who had far supreme basic gaits.

Danciera's 90.60% overall score with a 8.3 for walk, 9.2 for trot, 8.8 for canter, 9.5 for submission (second highest submission score of the day) and 9.5 for perspective. These scores more rewarded the beautiful riding and outstanding rideability of the noble mare than her ground quality. It certainly was a good way for the judges to set the tone that proper, horse friendly, classica riding was required for high submission marks. 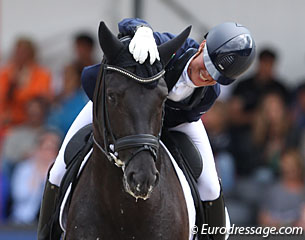 Adelinde Cornelissen and Mr Korbeld's Dutch warmblood stallion Governor (by Totilas x Jazz) completed the top five in the finals. The beautiful black stallion is quite short in the back and has some Jazzy underneck, but he's a wonderful athlete with three very good basic gaits. The trot was active, engaged from behind with a nice cadence and good swing in the body. He was a bit rushed at the start but the rhythm improved and the extensions were brilliant. The extended walk had good relaxation and overtrack  but could have been slightly more active. In canter the black stallion was uphill and showed lovely simple changes. On the left lead the hindquarters were slightly crooked. The down side of the rider was certainly the contact. The horse constantly crossed the jaws, opened his mouth and had the tongue appearing in front of his mouth. In the trot on the long rein, he showed no ability of stretching the nose out and forward over the back. Nonetheless Governor is a very talented horse for the future.

Governor scored 8.5 for trot, 8.7 for walk, 9.0 for canter, 8.2 for submission and 9.0 for perspective to total 86.80%. The judges praised the athletic stallion for his "elasticity and swing in trot, but he needs to be more round and through the neck."

Chairman of the judges Francis Verbeek was enthusiastic about the quality of the 5-year-olds. “On behalf of the judges I would like to congratulate both the medal winners and the other participants. We have seen top horses and top performances. These three were absolutely the best, but also the overall quality of the horses in the final was high. We as the jury enjoyed these talents. We expect a lot from these horses in the future.”

Eurodressage is on the scene taking photos. If you are interested in ordering prints or digital files for Facebook/instagram, please send us your name and we will mail you the proofs of the photos for you to choose from.