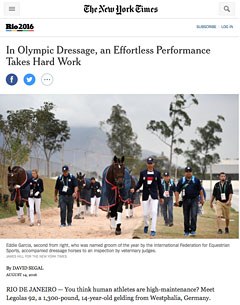 I was quite intrigued by the article I read on dressage in the International New York Times on my flight back home from 2016 Olympic Games in Rio de Janeiro. NY Times author James Hill presented a simplistic and almost derogatory view on our sport with a touch of so called humour. While there were some funny moments, Hill's article doesn't compare to the inspirational piece Sam Knight delivered with his Charlotte Dujardin article for The New Yorker three weeks ago.

In the New York Times James Hill calls dressage, "the equestrian version of ballroom dancing" and he wrote that "The Olympic website states that dressage originated 2,000 years ago with the ancient Greeks, who developed it “to train the horses for war.” If so, we must assume that the Greeks were not trying to overrun their foes so much as dazzle them with fancy footwork."

Hill was not impressed by the background music Markus Hinzke arranged in the stadium for the Grand Prix and Special at the Olympics: "Inside the arena, the crowd was sparse, and the music played during tests, as dressage rides are called, could be categorized as Retirement Community Lite, mostly orchestral versions of rock standards chosen to perk up the place or to muffle sounds that might otherwise distract the horses (a challenge because of patrolling helicopters)."

I did chuckle when Hill compared the piaffe to "the distinctive, high-stepping, bouncing-in-place gait that gives the impression that horse and rider are getting excited about an imminent cup of tea."

Unfortunately Hill could not cope with the complexities of our most beloved discipline in the equestrian sport and finished his pamphlet with "indeed, part of the wonder of dressage is watching an animal behave in ways that seem so unnatural — picture a poodle scuba diving."

Thank you for enlightning us, James!