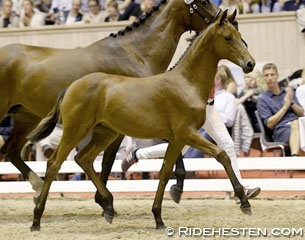 This year not the colts but the fillies were the best sellers of the auction. The auction price highlight Lissau's Ginger sold to Norwegian young rider Alexandra Andresen for 47,000 euro.

The second most expensive foal was filly Straight Horse Zarina (by Zalabaster x Don Schufro) which sold for 27,000 euro to Jane Bartram of Holland Bends stud farm in Australia. This filly is out of the same dam as Sezuan.

The most expensive jumper foal was Constantin VH (by Conner x Clinton I) which sold for 14,775 euro to Niels Osterland, Denmark.

From the ten foals that made it to the champion's ring, vying for 2016 Danish Warmblood Foal Champion's title, only two were sold at auction. Finalist filly Hedelunds Miss Infinity sold for 8,700 euro, finalist colt Lykke D'Artagnan sold for 9,400 euro.

A total of 59 foals were sold for an average price of 10,775 euro. 83% of the foals were sold, the rest was either scratched or bought back by the owner.