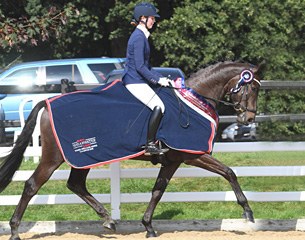 On Sunday the audience were treated to the exciting finale of the British Young Horse championships, three titles were there for the taking and twelve combinations aging from four to six year olds. For the climax of this finale, Eva Moller was rider judge, a German young horse trainer at the world renowned Hof Kasselmann in Hagen. She put each of the young horses through their paces who, though young, demonstrated their spectacular talent and took the Championships’ atmosphere in their stride making for a very close showdown in each of the age groups.

In the 4-year old class, the Hawtins stud in Gloucester celebrated success defending their 4-year old champion title, won last year by Hawtins Duchessa, this time was the turn of Hawtins San Floriana ridden by Bryony Goodwin. The pair already won the warm-up round on Saturday with a score of 8.60 and claimed top honour in the finals after Eva Möller test-rode the horse. She said, “this is a high quality mare and she gave me a very good feeling”. Hawtins San Floriana is a Hanoverian mare by San Amour out of Hawtins Floriana (by Florestan x Weltmeyer). The dam represented Great Britain at the 2012 World Young Horse Championships. The runner-up in the British 4-year old Championship was Sadie Smith on her own and Sarah Evans’ River Rise Magic Mike, a striking dark bay AES licensed stallion by T Movistar x Prestige CDL x Negro). The pair kept the second place which they held after scoring 8.12% in the warm up round.

“She’s come out better and better each day, I felt she was a little conservative yesterday but today she was fantastic, coping really well for a four-year-old in this atmosphere” said a thrilled Bryony after winning the title on San Floriana. “She’s a precocious mare and can be a bit of a diva!” said Judith Davis, breeder and owner of Hawtins Stud, “She’s very rideable and is similar to her mother in that she’s not sharp or silly.” Flo now heads to the British Hanoverian Society Show at Keysoe next week to do her Mare Performance test which includes some jumping, “dressage is definitely her discipline!” laughed Judith. 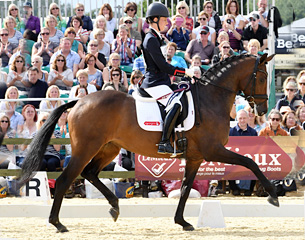 The 5-year old division was a clean sweep for Emma Jane Blundell's Mount St John brood farm in Felixkirk. Her horses claimed gold, silver and bronze, a historic feat for British dressage and horse breeding! Charlotte Dujardin claimed her sixth title of these championships this time on Mount St John VIP. This bay mare is by Vivaldi out of Maradonna (by Donnerhall x Classiker), the dam who produced licensed stallions Furstenball, Desiderio and Winehouse. Möller described Mount St. John VIP as “everything a rider wants”. Dujardin and VIP were second in the warm-up round with 7.66% and were beaten by stable mate MSJ Top Secret. Under Mount St. John's stable jockey Lucinda Elliot the bay mare scored a winning 7.76%, but in the Finals the pair was second after being test ridden. MSJ Top Secret is a British home bred mare by Totilas out of FBW Deja Vu (by Dacaprio). Elliot and Mount St John Furstin Fugger, the Oldenburg bred full sister of Bundeschampion Furst Fugger, were third.

“She’s amazing, an incredible mare to ride and everything you would want from a five-year-old” said a delighted Charlotte who is evidently very excited about this young prospect. “I knew Eva would love her as she’s so light in the hand and responsive to your leg. After she’d ridden her, Eva said she was ‘beautifully trained’ which was a really nice compliment.” 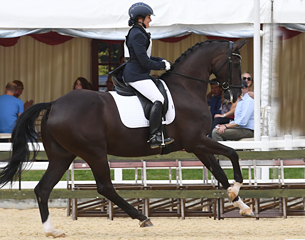 In the 6-year old division Caroline Church and the lovely San Marco (by Status Quo out of Ubally) topped the section. Church and her own dark bay gelding were only fifth in the warm-up round with 7.26%, but claimed the title after guest judge rider Eva Möller high scored the horse. The winners of the warm-up round with 7.58%, Paul Hayler and FJ Veyron, became the reserve champions. Hayler and Fiona James' Veyron (by Vivaldi x Fidermark) landed second place after the finals. It is FJ Veyron's second reserve champion's title. In 2014 he placed second in the 4-year old division under Garry Williams.

“I’m absolutely thrilled,” said winner Caroline, “I totally believe in that horse and wanted him to be recognised. He’s very cheeky, as he’s such a big character you have to get on him and ride him, but there’s not a nasty thought in his head.”

Hampshire-based Caroline, a self-employed writer and illustrator of children’s books, only bought the horse in April of this year and quickly qualified him for the Nationals. “Isobel Wessels bought him as a three year old and sent him to Matt Hicks to be backed and hacked lightly, which is where I’m now based. Two years later having been with Lucy Cartwright, Isobel said to Matt that she was thinking of selling Marco and asked if he knew of everyone and he thought of me. I went to try him with my trainer, David Hunt, and I knew he was the one!”

The sky’s the limit for this combination with Caroline set on Grand Prix in the future. “Now I’ve got such a good horse I don’t want to have any limitations!”