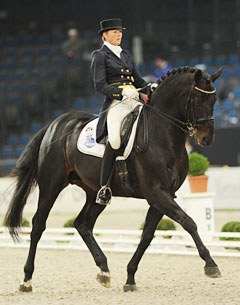 Lautrec dropped dead and fell on his rider, who sustained a femoral neck fracture. The rider is currently hospitalized.

Lautrec was a 2000 born Bavarian stallion and bred by Martin Niedermaier, who is also the breeder of Spanish Olympic team horse Lorenzo. He was by Lord Sinclair out of Lava (by Adlerschild xx x Escorial x Loretto).

He was licensed as a 3-year old at the 2003 Bavarian Stallion Licensing in Munich, but there is no offspring registered with the German equestrian federation.

Von Block acquired Lautrec as a youngster and started his competition horse in the riding horse tests when he was a 4-year old. Her trainer Uwe Schwanz briefly competed him in 2005 and then took over again in 2006. The pair finished 11th at the 2006 Bundeschampionate for 6-year olds.

Von Block made the transition to small tour level with him in 2007 and she showed him extensively at a massive amount of competitions in Germany throughout the years up to Grand Prix level until August 2016. The pair finished 7th in the 2008 Nurnberger Burgpokal Finals and competed internationally from 2009 till 2012 with CDI starts in Munich, Stuttgart, Achleiten, Frankfurt and Brno.