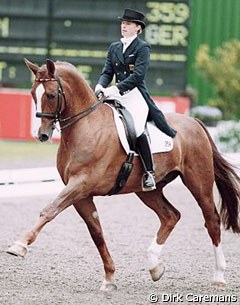 Nadine Capellmann's career making Grand Prix horse Gracioso has passed away at age 31. The Westfalian gelding was euthanized on Sunday evening 13 November 2016 after suffering from a dramatic bout of colic.

The Westfalian Gracioso was born in 1985 and bred by Wilhelm Feldhaus. He was by Grundstein I out of Remona (by Renaldo x Golderg x Gründer).

He was first competed as a 4-year old in 1989 by Wilhelm Zegers, who took him from the riding horse tests to A-level. Klaus Balkenhol purchased the horse from Zegers and took it to FEI level. Klaus began showing him in the small tour in 1994. Anabel showed him once in October 1994. In 1995 the horse made the transition to Grand Prix level with Klaus. By September 1995 Nadine Capellmann had bought Gracioso for the then staggering amount of 1 million Deutsch Marks and she continued the horse's show career.

They won over 300,000 euro in prize money at shows in Germany alone.

"When a horse turns almost 32, the logical part in a human can say he had a full life, but in my heart it still hurts," Capellmann said about the passing of her chestnut gelding. "Gracioso will always have a special place in my memories. He enjoyed his daily paddock till the end as well as Sabine's loving care. He leaves behind a big empty spot in our stable and we'll miss him greatly."