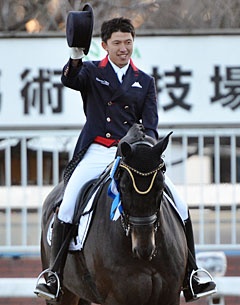 A panel of five judges, including Maria Schwennesen, Alison King, Carlos Lopes, Mary Seefried and Chang Kyoo Yang, officiated at the 2016 CDI Tokyo. It was the final event at the Tokyo equestrian centre because as of January 2017 the grounds will be stripped and rebuilt in preparation for the 2020 Tokyo Olympic Games.

The youth divisions ran over two tests (the individual and the kur), the small tour featured the Prix St Georges and the Inter I Kur, whereas the big tour had its three official classes going: the Grand Prix, Special and Kur.

The junior riders' division was dominated by newcomer Yurie Yoshida, who trains with Yuko Kitai at her Hacienda Riding Club. The 15-year old saddled the 13-year old Danish warmblood gelding Engbjerggaards Ballestino (by Michellino x Ragazzo x Arsenik), bred by Bitten Beck Jeppesen, which she acquired on a shopping trip in Germany only four months ago in September. The new duo scored a winning 68.631% in the Individual Test and 68.625% in the Kur to Music. 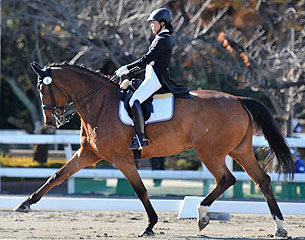 At young riders' level it was the 16-year old Mio Fukuoka who reigned supreme aboard Tiida (by Fetiche du Pas x Diamantino). Trained by Ryuma Hieda at the Little Horse Club in Kobe, Japan, Fukuoka made her international show debut only one month ago at the CDI Taipei aboard the 13-year old bay Whisper. In Tokyo she saddled her mother's 14-year old chestnut Westfalian Tiida and she won twice with 66.815% in the individual test and 70.250% in the Kur to Music far ahead of the rest of competition.

"For 2017 I'd liek to compete at more shows to be well prepared for the Japanese Young Riders Championships in July," Fukuoka told Eurodressage. "And then my next plan is to get ready for the Nationals in November."

In the 1* small tour the 2014 Japanese Dressage Champion Shingo Hayashi and the 14-year old Dutch warmblood Veranus (by Lysander x Nabuur) won the Prix St Georges with 69.973% and the Inter I kur to Music with 72.525%. Hayashi has been competed the gelding internationally since the beginning of 2014.

"Veranus did a super job. He can sometimes become nervous at the show grounds, but this time he was very relaxed and concentrated," Hayashi told Eurodressage. "I have been riding him for seven years now and went to the 2014 Asian Games with him." 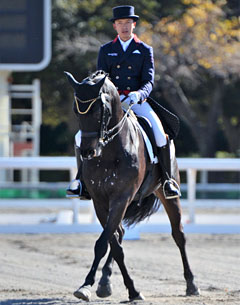 In the 3* big tour the 31-year old Hayashi dominated the pack aboard Tsunehiro Shimoda's 18-year old Dutch warmblood gelding Ramses der II (by Gribaldi x Esteban). The duo has competed in Japan as well as Europe since April 2015 and this year Hayashi just missed out on an Olympic team spot with Clearwater after the gelding failed to pass the vet inspection at the last Japanse Olympic selection trial in Hagen. Back in Japan, Hayashi relied on the good old Ramses der II to score a triple victory in Tokyo.  They achieved 66.900% in the Grand Prix, 67.862% in the Special and 72.300% in the Kur to Music.

"Ramses did a super job," said Hayashi who is trained in Japan by his sponsor, Mr. Shimoda. "He doesn't have special movements, but he is always very concentrated on my aids." Shingo also added that Clearwater will finally be making the move to Japan this month. The rider's clear goal for the future are the 2020 Tokyo Olympics.