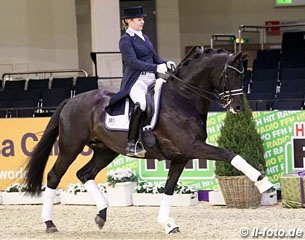 Swedish Grand Prix rider Michelle Hagman has received the ride on the highly popular Trakehner stallion Millennium. Hagman went from a half time to a full time bereiter position at Gestut Sprehe in November.

The 31-year old Hagman has worked all across Western Europe as a bereiter, first starting at Sabine Rueben's place and then moving to horse dealer Arnold Winter before relocating to Silke Pelzer's Rosencaree in Berlin. She then went to Andreas Helgstrand's stable in Denmark, then back to Arnold Winter to make the circle complete and return to Sabine Rueben in 2016. Because of the close collaboration between Rueben and Gestut Sprehe, Hagman was introduced at the Löningen based stallion station and began working there half time.

Hagman was allocated the ride on Millennium (by Easy Game x Ravel x Consul) already in the summer of 2016 and first presented him in public at the stallion show in Moritzburg in September. 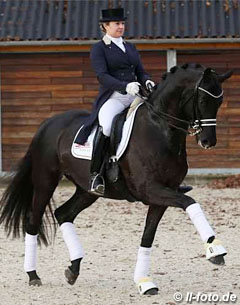 The 8-year old Millennium is one of Germany's most popular breeding stallions, but so far has not had a significant show career. In 2012 he was competed as a 4-year old in the riding horse tests by Kay Pawlowska and in 2013 he only did two local shows at A-level. Kristina Bröring-Sprehe took over the ride from Kay and only competed him once in a local M-level test in December 2015. The German Olympian also presented the horse at the stallion shows at the time, but now Hagman will ride the Trakehner stallion.

Michelle brought Millennium along for training to the 2016 CDI Frankfurt, where she competed her Grand Prix horse of two years, the 11-year old Hanoverian bred Happiness (by Hochadel x Walt Disney). The chestnut was owned by Hans Rueben but has now been secured by Albert Sprehe for Hagman to ride.

When asked what feeling Millennium gives in the saddle or if Michelle has any competition plans with the horse, the Swedish rider declined to comment.