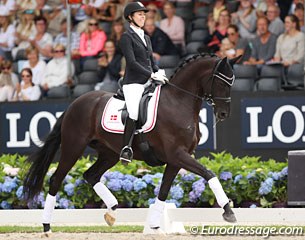 Heiline's Danciera, Denmark's fourth placed horse at the 2016 World Young Horse Championships in Ermelo, has been sold to a Danish breeder who will use the mare for breeding and sport.

The 6-year old Heiline's Danciera is bred by Heine Bonde Mikkelsen and Line Jensen, whose first names combined lead to the brood farm's name Heiline. She is by Furstenbal x De Niro. The mare won the silver medal at the Danish warmblood elite mare show.

Under Carina Cassøe Krüth the black competed in the 5-year old division at the 2016 World Young Horse Championships in Ermelo, where they finished fourth.

She has now been sold to Ingrid and Paul Thøgersen of Four Oaks brood farm in Denmark but she will stay in training with Kruth. Danciera will be part of the Four Oaks breeding programme through embryotransfer.

"We are happy that Danciera will stay in the country with such ambitious owners and we think it's fantastic that she will stay with Carina," former owner Line Jensen told Ridehesten.