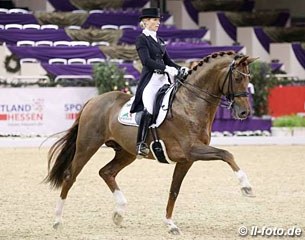 The KWPN society has approved Vitalis for Dutch warmblood breeding. This is a surprising U-turn after rejecting the stallion in 2012 for his weak hindleg and pedigree. Grand Prix stallions Blue Hors Zack and Cennin were also approved.

Bred by A. de Crom, the 10-year old Dutch warmblood stallion Vitalis (by Vivaldi x D-Day) was first licensed in 2009 with the Westfalian society, where he was proclaimed reserve champion of the licensing. In 2012 owners Willeke Bos and Eugene Reesink tried to get him licensed with the KWPN society but he was rejected at the timing because according to the studbook his hindlegs were not strong enough and his bloodlines were not considered unique enough for approval.

The stallion sold as a sport horse to Charlotte Jorst in the U.S.A., who competed him at the World Young Horse Championships in Verden. The chestnut then sold to Paul Schockemohle and Lone Boegh Henriksen who brought him back to fitness and show shape. Under Isabel Freese, the stallion won the 2016 Nurnberger Burgpokal Finals for German Developing Prix St Georges horses. Vitalis' daughter Victoria's Secret also became the 2016 World Young Horse Champion in Ermelo.

Now the KWPN society considers the stallion good enough for approval after all. Their motivation reads: "he's extremely successful in the Prix St Georges/Intermediaire I under Isabel Freese. In breeding he scores remarkably with the 5-year old World Champion. Also the champion of the last Westfalian Stallion Licensing is a son by Vitalis."

Madeleine Witte-Vrees' A-team listed Grand Prix stallion Cennin (by Vivaldi x Donnerhall x Hemmingway) as well as the 2007 KWPN licensing champion Blue Hors Zack (who never did his performance test in Holland) were accepted for KWPN breeding. Zack was originally named Zagreb at the time of the licensing.