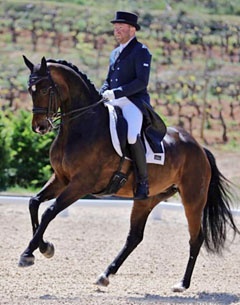 Romy is bred by Anke von Riegen and the Fairchilds acquired her from Lebanese Karim Barake. The mare is by Rousseau out of Rawina (by Rotspon x Lauries Crusador xx x Perfekt I). She is a full sister to the internationally competed, licensed stallion Harmony's Fiorano (Susan Pape).

Romy began her dressage career as a 3-year old in Germany under Stephan Luze. She competed in the riding horse classes at three regional shows with Luze and once under Silke Hoffmann. The dark bay mare made her show debut in France in 2010 under new owner Laurence Bigan. The pair competed in the 4 and 5-year olds tests in 2010 and 2011. She then disappeared from the scene until 2015.

Under Jean François Vesin, Romy competed at national Grand Prix level for two years. She made her GP debut at the CDN Gex in June 2015 and showed consistently at GP level at national shows in Nice, Thiers, Chazey Sur Ain, Les Arcs, Salans, Cluny, Crozet, Thiers, and L'Hopital le Grand through October 2016. Vesin and Romy finished second with 63.465% in their last Grand Prix at the CDN Chazey Sur Ain in October 2016. 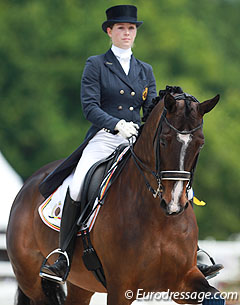 The dark bay mare Romy has now moved to The Netherlands, where Alexa trains with Anky van Grunsven. Alexa's current number one Grand Prix horse Vanita suffered a colic attack on New Year's Eve and was operated on at the equine clinic in Someren. The Jazz offspring recovered well from the operation in which no intestine had to be cut.  Alexa will have three Grand Prix horses to compete in 2017: Vanita, Sunrise and Romy.