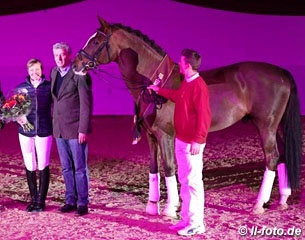 The liver chestnut Don Diamond (by Diamond Hit x Carolus x Wenzel I) is bred by Stefanie Hofmann and owned by the Casper family.

He was the champion of the 2007 South German stallion licensing, 2008 reserve Bundeschampion and multiple regional champion. In 2011 he competed in the Nurnberger Burgpokal Finals in Frankfurt. In 2012 he sustained an almost career ending injury in the tent stall at the CDN Nussloch, but the horse made a miraculous recoverey and returned to the regional show ring in 2013. His last show was at Grand Prix level at the regional show in Göppingen in October 2016.

The elite status was granted to Don Diamond by the German Sport Horse studbook (DSP) which covers the south and east German breed societies. The title is bestowed on stallions which have proven themselves in breeding and sport through their offspring. Don Diamond joins Quaterback as a DSP elite stallion.