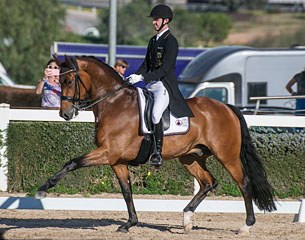 Far away from all the hustle and bustle on the Western European dressage scene, German Olympian Sönke Rothenberger made his show come back on Cosmo in the 30° C sun at the 2017 CDI Valencia, Spain. With no crowds to scrutinize the ride nor able to raise an electric atmosphere, Rothenberger easily ruled a field that provided no competition.

Rothenberger and Cosmo were one of the last world elite pairs that have not yet competed since their start at the 2016 Olympic Games in Rio de Janeiero. Ferrer-Salat's Delgado and Karen Tebar's Don Luis are still amongst those no shows. With a seven month break from competition, Sönke was able to focus on improving the piaffe work on his bay Dutch warmblood gelding (by Van Gogh x Landjonker) as well as allowing his sensitive gelding to mentally mature.

"For several years now we have chosen to start the outdoor show season in the south before the big and important qualifications begin," said Rothenberger about the decision to go back south. In 2016 they began the show year by competing at the CDI Jerez de la Frontera. "Like that we know on time what we still have to work on or what needs to be changed. During the winter months Cosmo gained a bit of weight, matured." 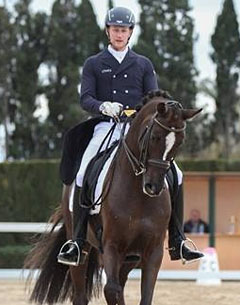 Former German team rider Matthias Rath also decided to stay far away from the spotlight and the public by competing in Valencia. He brought along two small tour horses, the 9-year old Hanoverian licensed stallion Foundation (by Fidertanz x De Vito) and the 8-year old Oldenburg bred Sir Picardi (by Sir Donnerhall I x Don Picardi). Rath stayed in Valencia for the two CDI's back to back and was undefeated on Foundation. For the first week of competition, coach Sjef Janssen briefly flew in to give some last minute tips to his student.

Sönke Rothenberger's younger sister Semmieke contested the Young Riders' division on week two in Valencia aboard her two horses, Geisha (by Gribaldi) and Dissertation (by Don Crusador). She won the team test and Kur with Dissertation (75.789% - 76.375%) and the individual with Geisha (74.921%). Rath's younger sister Liselott Marie Linsenhoff saddled Danonchen that week and won the team test (71.937%), placed second in the individual  (69.167%) behind Spanish Alba Abollo Fontela and was fifth in the freestyle (69.625%) which was won by Spanish Gemma Guerrero Garriga.