Pia Fortmuller To Return Home to Canada after Wellington Layover 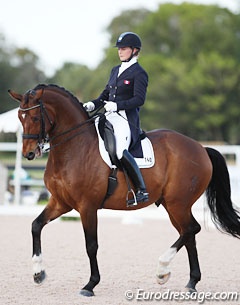 Canadian Grand Prix rider Pia Fortmuller is returning home to Canada after seven years of training in Germany. The 31-year old Canadian had a stellar rise on the international Grand Prix scene in Europe with Orion, but after the untimely passing of her horse, she had to take a major step back. With a string of four talented horses in tow, Fortmuller will now set up her own business at the family yard in Calgary.

"Yes, I have moved back to North America. My boyfriend Lars Busch, who is a farrier by profession, and I packed up our lives in Germany and flew to Wellington with our four horses in December," Pia told Eurodressage. "We will stay here until the beginning of April and then we will head up to Canada, where my mother, Dagmar Fortmuller, runs a training facility just outside of Calgary, Alberta."

Fortmuller's home coming involved a lay-over in Wellington, Florida, where she has competed three horses, Frieda, Balesteros and Romulus, at national level.  The 11-year-old Westfalian gelding Balesteros (by Belissimo M) is her upper level horse and the pair has been together for 3.5 years. They recently took second place in the medium tour classes Intermediaire A and B in Wellington. 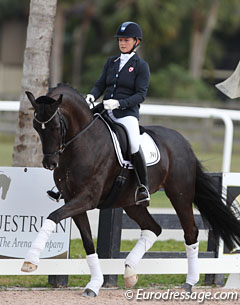 “I’m loving it,” said Fortmüller of her time in Florida. She competes for Canada, and has great hopes for Balesteros. “He’s really green at all the Grand Prix stuff,” she says. “But through this experience he’s getting more confident. That’s why all these shows are fantastic. You have the options to get your horses out there and expose them and grow their confidence.”

Pia's 6-year old Hanoverian mare Frieda (by Furstenball x Rouletto) put the Canadian briefly back in the international spotlight when the pair competed at the 2016 World Young Horse Championships in Ermelo, The Netherlands. They placed 6th in the consolation finals with 80.20 points. This year in Wellington, she showed the gorgeous black mare in young horses classes at the February CDI in Wellington and won both tests with 85.40 and 85.0 points.

Fortmüller grew up in Calgary and was introduced to horses by her parents. As she got older, she trained with Albrecht Heidemann and Canadian Olympian Leslie Reid. In 2006, she won both team and individual gold at the prestigious North American Young Rider Championships in 2006. In 2012, she was named reserve rider for the Canadian Olympic team in London. 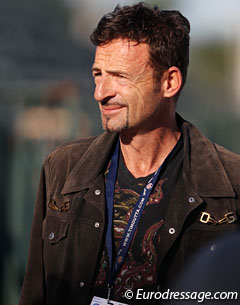 "In terms of training it's worked out perfect because my long time friend and trainer Albrecht Heidemann is based here in Florida for the winter months," Pia explained. "I have know Albrecht since I was 13 and he was the guiding figure to the kick start of my dressage career and assisted me all through my Junior Championship achievements right up to my successful Young Rider years. Then as I moved to Germany Albrecht and remained in touch as he is a very important friend and mentor to me.

In Europe, Fortmuller worked extensively with Heike Kemmer and most recently with Jonny Hilberath. She has now called her Euro-tour quits and is working again with Heidemann in Florida.

"With my move back to North America the transition to training with Albrecht again has been seamless, as well as super productive," said Fortmuller. "Especially because I am able to take everything I have learned over the years, and that combined with Albrecht's critical eye and motivational approach it makes for a great training dynamic." 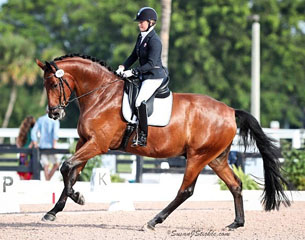 Her goal for this year is to get Balesteros to Grand Prix and bring along her other three young horses. Aside from 6-year old Frieda, which Busch discovered at the Hanoverian auction in Verden, Pia also trains the 5-year old Hanoverian gelding Romulus (by Romanov). The tall bay gelding was acquired as a foal. Pia also brought along a very special, home bred youngster, the 6-year old gelding Quido (by Quidam Blue), which she bred out of her Young Riders' Champion mare Donagna (by Don Primero).

"He reminds me so much of his mom and he has so much talent, we are pretty excited about his future," said Fortmuller. "At the moment I have a lot of green but very talented horses so we are very excited about the future."