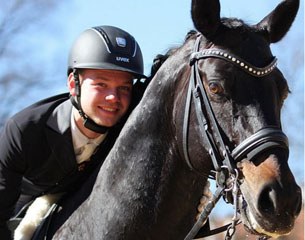 German Raphael Netz has made a successful jump from the pony division straight into young riders and booked his first hattrick on his young riders CDI debut at the international competition in Caselle di Sommacampagne, Italy, on 17 - 19 March 2017. Netz and Ritz Carlton won all three Young riders classes at this spring show.

Although Raphael just turned 18 years old today 24 March, he already has a very extensive show record built up with his ponies. He made his CDI debut in 2013 and competed three years straight in a row at pony level with Schierensees Don't Do It, Skylinger, and Fin C. His last CDI was the 2015 CDI Wien.

After a one year break from international events, though a very active 2016 on a national level with a large string of horses (including Alex, Ducati, Charmeur, and Braveheart), Netz now made his come back to the CDI show ring with two horses, Ritz Carlton and Lacoste.  The 10-year old German Sport Horse Ritz Carlton (by Rivero III x Pour Plaisir) helped Raphael snatch the trophies in Caselle di Sommacampagna. The pair scored winning marks of 70.00% in the team test, 69.912% in the individual test and 74.083% in the Kur to Music.

"Ritz went extremely well," Raphael told Eurodressage. "He was very calm and relaxed, I had the impression he really enjoyed himself in the test. I am specifically happy about our freestyle test. We did not have time to train that much yet and despite that Ritz showed a top performance."

"Lacoste is already a very strong horse with lots of potential but he is also somewhat unexperienced in competing. We still need some fine tuning so he had a few minor "hiccups" during the canter," said Netz. "Overall I am very satisfied with both of them. It was our first international competition together. In that respect I am very curious what the future has in store for the three of us." 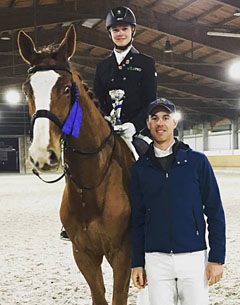 Raphael has been riding both horses for half a year. After graduating from high school he decided not to pursue further studies, just yet, but instead is building a professional career as a rider. He is currently working as a bereiter at his coach Benjamin and Jessica Werndl's yard in Aubenhausen, Germany.

"Currently competition sport has higher priority," Netz explained. "Horse development and competition riding have been my deepest passion ever since I was a smaller kid. Here in Aubenhausen and with Benjamin and Jessica I receive best and optimal conditions to continue developing my skills."

So, Raphael keeps an academic path on the back burner for now. "It is not quite true that I have no interests in further studies, though. I do plan that in the future. At this moment, however, it's not my highest priority," he stated. "I really would like to gain lots of experience in the national and international Young Rider tour, but also have fun at the various competitions. Generally speaking, it is my goal to compete at the European Young Riders Championships. We'll see what's possible this year. The only thing I can do, is do my best."