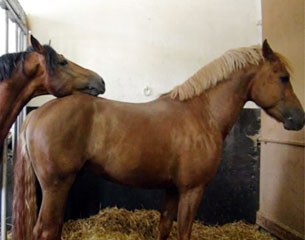 In order to give individually housed stallions the opportunity to have more social interactions, the Swiss national stud farm investigated a separation wall called the "social box." Sixteen adult Franches-Montagnes breeding stallions were housed for 3 weeks in conventional boxes (CB) and for 3 weeks in social boxes (SB).

Researchers Zollinger, Wyss, Bardou, Ramseyer and Bachmann of the Agroscope, Haras National Suisse and Swiss Institute of Equine Medicine ISME, Agroscope and University of Bern, investigated the social behaviour of stallions in the social box and presented their findings at the 2016 International Equitation Science Conference in Saumur, France, on 23 - 25 June 2016

The separation wall of the SB consisted of one part with vertical metal bars (2.55 m high) spaced at 30 cm allowing the horses to pass the head, the neck and the legs into one of the adjacent boxes. The separation wall of the CB consisted of a lower solid wooden part (1.40 m high) and an upper part (another 1.15 m high) with vertical metal bars spaced at 5 cm strongly limiting tactile contact.

The stallions participating in this study all grew up with conspecifics, as prescribed by law in Switzerland. They were individually housed in a CB since they arrived at the stud as 3-year olds. During the whole experiment, there were no mares present in the nearby area. Boxes were assigned randomly.

After 3 weeks of habituation, the social interactions of the horses were video recorded for 24h in both CB and SB and analysed. The valence of every social interaction phase was assessed (positive; negative; indeterminate). Injuries were recorded weekly. 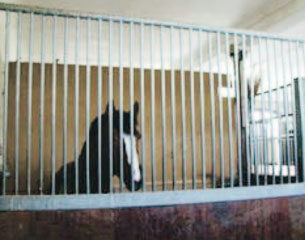 No grievous injuries were recorded. Skin damage was mainly situated above the eyes. Damage was not directly caused by the neighbouring horse, but rather when the horses bumped their head against the metal bars during social interactions. The stallions were able to have increased physical contact without expressing potentially dangerous aggressive behaviours. Nonetheless, a solution must be found to pad the metal bars of the SB with a suitable material to limit the skin damage.

It can be concluded that the implementation of SB will improve housing conditions of individually housed horses.

Stallions are usually housed individually. The ‘social box’ offers them the opportunity to experience increased physical contact with another horse. In the social boxes, the stallions spent about 50 min a day interacting with their neighbour without expressing dangerous aggressive behaviours. No grievous injuries were recorded.