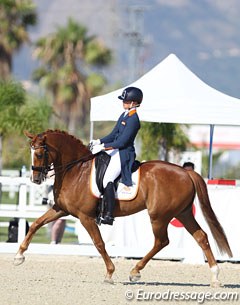 Dutch young rider Febe van Zwambagt has been hired as an assistant trainer at the German stallion station Ferienhof Stucker in Weeze, Germany.

The 19-year old Van Zwambagt recently made the transition from junior to young riders level and has already been working as a professional dressage rider. She was previously employed at RS2 Dressage but did not get enough horses to ride there.

At Ferienhof Stucker she's employed full time and does the 60 kilometer commute from Bergharen (NED) to Weeze (GER) six times a week. The Dutch team rider has a long-standing work relationship with the Wilbers' family who provided her with her FEI ponies FS Coco Jambo and FS Dr. Watson, as well as her junior horse FS Las Vegas.

In an interview with Horses.nl, Van Zwambagt said that "every morning I ride my own horses at home and then go to Germany. (...) It is of course a real stallion station so I ride a lot of stallions. I need to get used to that, but I learn a lot. At the moment I mainly ride young horses. It takes some time to adapt them to your hand, but in the future the plans is to also compete them there (in Germany)."