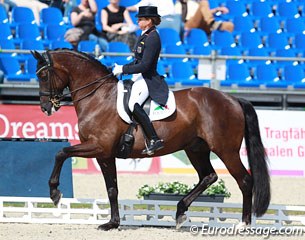 St. Emilion is a 12-year old Westfalian stallion by Sandro Hit x Ehrenwort, owned by Christina Ullrich. The stallion was acquired by Ullrich at the 2008 PSI Auction for 550,000 euro. Under Dorothee Schneider he won bronze at the 2011 World Young Horse Championships. They finished 8th in the 2012 Nurnberger Burgpokal Finals for Developing Prix St Georges horses. Two years later St. Emilion made his international Grand Prix debut in 2014. He became a recipient of the 2014 Otto Lorke Prize for being one of the most promising Grand Prix horses in Germany.

St. Emilion did his last CDI in April 2016 in Hagen and his last national show in Linslerhof Uberherrn in July 2016. He has not been out to a competition since then.  The bay stallion is currently in training with Norwegian Isabel Freese-Bache, who is based in Mühlen, Germany. 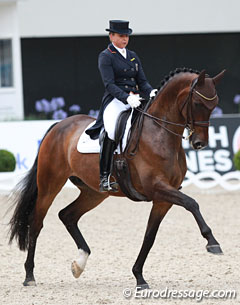 Santiago is a 10-year old Hanoverian gelding by Stedinger x Dacaprio, owned by Alexander Stolzke. The combination made its international CDI debut at the 2015 CDI Fritzens and two months later won both small tour classes at the 2015 CDI Darmstadt. In December Dorothee and Schneider achieved a banging victory in the Nurnberger Burgpokal, the German championships for developing Prix St Georges horses. In 2016 the horse only showed internationally in the Prix St Georges at the CDIO Aachen and finished second. The horse had made its Grand Prix level debut at national shows in the spring of 2016.

Schneider still has three further Grand Prix horses to compete: Her number one Showtime, who's recovering from a minor injury, Sammy Davis Jr, who was recently submitted to the A-team, and Fohlenhof's Rock 'n Rose. In the wings are the rising Grand Prix hopefuls Kiss Me,  De Valier, Chocolat, and triple world champion Sezuan. With the 9-year old Faustus (by Falsterbo x Forrest xx) she won the Inter II with 75.746% at last weekend's CDN Zeutern as preparation of the 2017 Louisdor cup circuit.