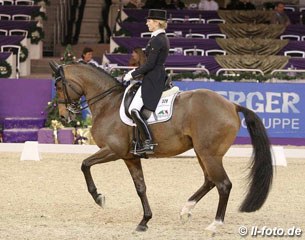 Sam's Ass was a 2007 born Hanoverian gelding bred by Hermann Troff. Sired by Samarant out of Perle (by Pink As x Maat I x Adlerflügel), the bay gelding was owned by Paul Schockemöhle.

The horse began its show career as a 5-year old under Richard Jordan. In 2014 Ann Christin Wienkamp took over the ride and began competing him at M-level. Freese took over in the spring of 2015, after she had moved to Paul Schockemohle's yard to become an assistant trainer there in October 2014.

Freese and Sam's Ass made their show debut in the developing PSG horse class at the 2015 CDN Verden in August. They were fifth. Four months later they already moved up the level and began showing in the intermediaire II at the Ankum winter events. They qualified for the 2016 Louisdor Cup Finals in Frankfurt (the German Developing Grand Prix Horse Championships), where they finished second.

They made their international show debut at the 2017 CDI Herning in March, which became their last show. The pair was well on its way for Norwegian team selection for the 2017 European Championships in Gothenburg this summer.

"Sam died last week Wednesday afternoon in his box from an aortic rupture," Freese told Eurodressage. "I was with him. I am devastated."