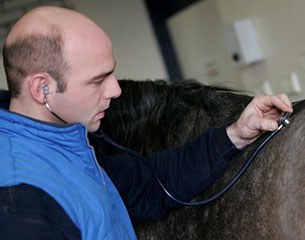 The Dutch equestrian federation (KNHS) has appointed the 42-year old Hank van Campen as the new veterinarian for the Dutch junior and young riders dressage team. Van Campen will be replacing Henk van Dijk, who has resigned from the position.

The Dutch born Hank van Campen did his veterinarian studies at the University of Ghent in Belgium and worked at stallion station Keros in Belgium before doing practive at the veterinary clinics in Bodegraven and Doetinchem. Hank specialized in orthopaedic problems and vet checks for sport horses.

Hank's life partner Rosalinde Heck runs a dressage stable and the couple has two children Elin (2014) and Hugo (2016).   Alongside being a veterinarian, Hank van Campen is also ring manager at Jumping Amsterdam and Outdoor Gelderland.

Henk van Dijk was team veterinarian for the Dutch youth dressage teams for twenty years. He took up the position in 1997