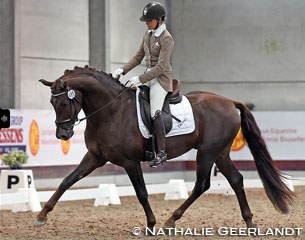 The 5-year old First Step Valentin, the 6-year old Go on Top MP, and the 7-year old Barroso became the winners of the fourth Belgian qualifier for 2017 World Young Horse Championship team selection. The fourth leg was held during the 2017 CDN Ghlin on 6 - 7 May 2017. A highly reduced starters' field appeared in Ghlin with much small divisions opening up more opportunity to rank highly.

For 2017 the national federation has scheduled seven Belgian qualifiers for Ermelo. Each horse's four highest scores at the qualifiers (2 scores in the preliminary test, 2 scores in the finals test) will be converted into points based on which placed they ranked at the show. The four horses with the highest points per age division will be nominated for Ermelo (two definite, two reserve).

In the 7-year old class Larissa Pauluis and Joop van Uytert's stallion Barroso (by Bordeaux x Saros xx) took their second win on the circuit in Ghlin with 75.107 points. Brecht d'Hoore and the Korean owned Dutch warmblood Favian WH (by Zizi Top x Roman Nature) were the runners-up with 75.686 points, whereas Julie Dossin and her 2015 World Championship ride First Lady (by Sir Donnerhall I x Johnson) finished third with 73.588 points.