Mikala Munter and Janne Rumbough Retire My Lady from Sport 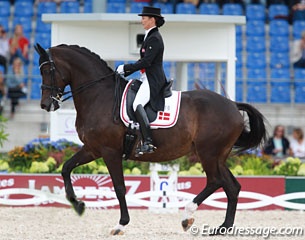 Rider Mikala Munter and owner Janne Rumbough have decided to retire the multiple Danish team horse My Lady from sport. The 17-year old Danish warmblood mare will slowly be prepared for a retirement to the field and a new career as broodmare.

My Lady is bred by Marlene Lindholm and is by Michellino out of Marion (by Ritterstern). She was originally named "Lady My" and began her competition career in Denmark as a 7-year old under Mette Rafn. She competed the mare up to M-level until the spring of 2011 and trained her up to Grand Prix level.

Janne Rumbough acquired the mare at the end of 2011 as a fun project to share with her Wellington based Danish friend Mikala Munter (formerly Gundersen). The new duo, who was always trained by Ernst Hoyos, made a stellar rise on the American dressage scene, becoming one of the most winning combinations in Wellington between 2012 and 2016.

Munter and My Lady went on to represent Denmark at the 2014 World Equestrian Games in Caen, France, the 2015 European Dressage Championships in Aachen, Germany, and at the 2014 and 2015 World Cup Finals in Lyon and Las Vegas. They were short listed for the 2016 Olympic Games but in the end were not selected to the upset of the team behind the mare as My Lady had achieved the necessary scores to put her with the best four Danish horses at the last qualifier in Aachen. 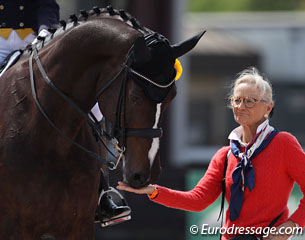 Mikala wanted to show My Lady this 2017 show season in Wellington, but it was not successful. After placing second in the January CDI-W Grand Prix with 71.220%, she was withdrawn from the freestyle. At the next CDI 5* in February, the mare did not pass the vet check. Munter's separation from her long-time husband Henrik Gundersen added to the disappointment of the situation.

"The journey with Mikala and My Lady has been amazing awesome to be part of," owner Rumbough told Eurodressage."We will miss the beautiful dressage they made together and I am proud to be part of."

"One of the hardest things in the sport is to decide when to stop. Janne and I  always agreed to end before My Lady would be too old to carry foals," Mikala Munter told Eurodressage. "Yesterday she got bred to Vitalis and now our new adventure begins. My Lady has taken us everywhere and we're forever thankful for what she has given us. Janne and I have enjoyed this adventure and we try not to think if it as it's coming to an end - we want to think of it as a new beginning." 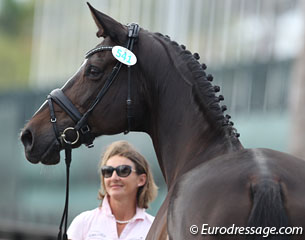 Probably Mikala's fondest memory of riding My Lady was her ability to dance in the freestyle. "One of the things I'll miss the most is showing our Burlesque freestyle," said Mikala. "In Wellington our music has become so popular that people outside the horse world would come and watch the Friday night freestyle. Everyone in town knows our Burlesque Freestyle and I had so much fun riding it. Lady knows every part of the music and she always anticipated the next transition. Often you would see me laughing during the test. It was such an amazing feeling to sit on a horse who wanted to do well and had fun doing it."

Although the mare's retirement from sport puts an end to the combination Mikala-My Lady, the future is bright. My Lady will go on as a broodmare at Judy Yancey's farm in Ocala, Florida and she has been bred to Vitalis (by Vivaldi x D-Day).

Rumbough is ecstatic about My Lady's new career as a broodmare. "She was bred yesterday," said Janne, who chose Vitalis as a sire because of his "great rideability, good movement and good frozen semen. This is a very exciting new chapter in My lady's life." 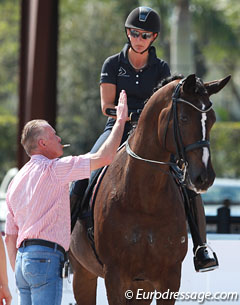 "I am lucky to have a group of very nice upcoming horses in my barn and I'm looking forward to see what the future brings," she said. "I am trying Rigaudon Tyme out this summer to see how we match. He’s a highly talented horse and I love riding him. Evi and I will be looking for investors to see if we can put together a syndicate so he can be secured with me. Dee (De La Vinci) is schooling everything for the Grand Prix. He is also very talented and I’m planning on having him ready for Grand Prix next winter."