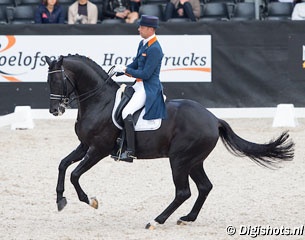 The Austrian gun mogul Gaston Glock has acquired a share in the ownership of the 9-year old Dutch warmblood licensed stallion Dream Boy to secure the ride for Hans Peter Minderhoud.

Dream Boy is by Vivaldi x Ferro x Balzflug and was owned by Tim Coomans, Jacques Maree and Stable Brinkman.

In January 2016 the black stallion moved to Minderhoud's stable and in July they won silver at the 2016 Dutch Small Tour Championships in Ermelo. The pair has yet to make their CDI debut.

Glock has now bought a part in the ownership of the black stallion so he can remain with Hans Peter. "Dream Boy has all the requirements of a Grand Prix horse," said the rider. "He has outstanding talent, incredible ambition and great character. What a joyful day! I am so delighted that he’s going to stay with us."