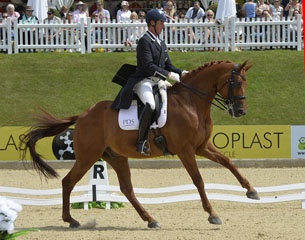 Olympic gold medallist Carl Hester made a flying start to the 2017 CDI Bolesworth International Horse Show as dressage took centre-stage on day one of the competition, Wednesday 14 June 2017, in Cheshire, Great Britain. After winning the 2017 CDI Windsor in May, Hester and Barolo were on repeat at Bolesworth.

Hester, whose glittering career is highlighted by Olympic and European team golds for Great Britain, won the CDI three-star grand prix, riding the 11-year old Hanoverian bred Barolo (by Breitling x Hitchock). The combination backed up a double success at last month's Royal Windsor Horse Show by taking the grand prix honours on a score of 74.24% to head a British clean sweep of the podium in Bolesworth's first international dressage competition.

And the grand prix's true international feel was further highlighted by riders from the likes of Hong Kong, Brazil and Finland also taking part, as dressage at Bolesworth was launched in style.

A packed programme continues on Thursday with the Grand Prix Special and Freestyle, plus a number of young horse classes, with Britain's double Olympic champion Charlotte Dujardin lining up on a number of her promising prospects, one of which might well lead her all the way to the 2020 Tokyo Olympics. 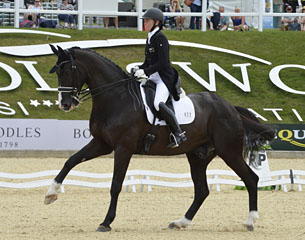 Hester was Wednesday's headline act, though, and he was understandably delighted following another victorious performance on the chestnut gelding that he co-owns with Anne Seifert-Cohn as a bumper crowd cheered its approval.

"He is very genuine. His piaffes have improved, and look how far he has come since last year," said Hester. "He feels really genuine in there. The horse has never had a young horse education. He came straight in doing grands prix two years ago, and he wasn't really ready, so we went back a couple of steps. He is so talented and so capable. I love riding him and I get on with him really well. I do enjoy it. The technical side of things is improving all the time. He is getting stronger."

Treating spectarors to a special demonstration, Hester and Charlotte Dujardin presented a master class in which the star horse was Hester's 16-year old Dutch warmblood stallion Uthopia (by Metall) made his second public appearance since his last show in January 2016 and the highly publicized executorial sale. Now owned by Hester in partnership with C. Kirk, Uthopia first appeared in public at a clinic at Leamside Equestrian in the spring and his Bolesworth appearance was his second since the sale. It is still uncertain whether the horse will ever return to the show ring. In November 2016 there were rumours he would compete again at the CDI-W Stockholm, but Carl stated Uthopia was not fit. To Horse & Hound covering Bolesworth, Hester said that Uthopia is currently being ridden three times per week.