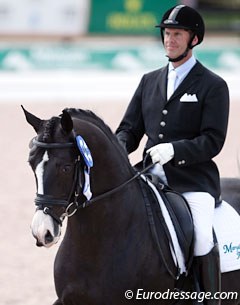 The 9-year old American Hanoverian licensed stallion Doctor Wendell MF has been sold to Maria Klementyeva in the winter of 2016.  Doctor Wendell MF is bred by Maryanna Haymon at Marydell Farms in North Carolina. With the sale of her young Grand Prix stallion, Haymon has proven and at the same time regrets that American breeders are better off selling their stock in Europe than domestically.

As a youngster Doctor Wendell MF (by Don Principe out of Stellar Hit MF (by Sandro Hit)) was first competed by Michael Bragdell and Chris Hickey before Jim Koford made him shine. Under Hickey he scored his first double victory in the 6-year old young horse class at the 2014 CDI Wellington. Chris showed the stallion for the rest of the spring season, when Doctor Wendell was stationed for breeding at Hilltop Farm.

Haymon had offered Doctor Wendell for sale on the American market and he was tried out by three big time North American Grand Prix riders but they responded with ifs and buts. The dilly-dallying of American customers prompted Haymon to ship her horse to Europe to be sold. 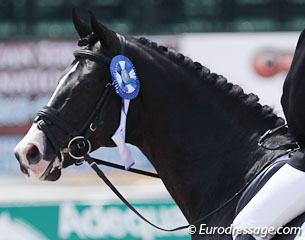 "We decided to sell Doctor Wendell MF in Europe only after trying to sell him in the USA for several years. We knew an American who lived in Germany and I had seen her ride several times over the previous years and knew she could do a wonderful job competing Doctor Wendell MF if he did not sell," Maryanna Haymon explained. "In fact, we had tried to find a sponsor to buy him for her to compete, but could not find one in the time frame we had set to have him sold to pay down the farm mortgage. Doctor Wendell MF sold to the first person to try him.

The first client that came along was Maria Klementyeva, who bought Doctor Wendell MF on the spot in Germany.

"From the beginning, when "Doc" was  a new foal, we knew he had that "something extra" that you can't breed for- it either is there-such as a presence or "look at me" attitude or it is not," said Haymon. "Doc had been actively for sale since he was 4 year old.  His price was determined by what we witnessed other horses of his quality  and age selling for in Germany. His sale price was adjusted by training level and age."

Haymon admits that it was frustrating she could not preserve the American bred and owned Doctor Wendell MF for a U.S. rider, the dream of any patriotic and sport oriented horse breeder. She knows she shares this frustration with many American dressage horse breeders who feel neglected by their country's trainers and riders, who prefer to travel to abroad Europe to shop for horses instead of buying domestically. 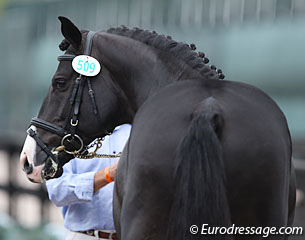 "I believe it is difficult to sell American bred horses in the USA for several reasons. The first is the long-held belief by the average American that the imported horse is better than the domestic horse," she said. "There is a certain cache to having the horse that came from Europe rather than the one who came from across town so to speak. Contributing to this is our geography and our lack of equine population density. In Europe, you can see 15 to 20 horses in a few days without having to get on a plane to see one or two in a location. This means less cost to the buyer in travel expenses, hotels, food, paying for the trainer to travel, etc."

According to Maryanna another major problem is breeders in the US "really do not understand what is needed for the horse to be a competitive upper level prospect. Breeders are usually too tied up trying to run their farm, do not have the money to travel to go out and watch the competitions, to see what type of gaits will do the job," she explained. "Many just see what is on a video or live streamed and they see the very top 2 %. Or they only watch the local shows and do not see international quality."

Haymon believes the cultural difference between the USA and Europe lies at the root of a lagging U.S. market. 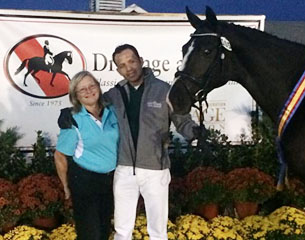 "The culture in the USA is drastically different than in Europe. In Europe, horses are livestock or a simple hobby of a well experienced breeder who is immersed in competition," said Maryanna. "Here in the US, horses are pets, or the "grandchildren" of the breeder. And no one gets to critique your grandchildren. I am a grandmother of 4, so I understand this better than most. So many breeders think that their offspring are top level prospects when they are not. Many buyers have experienced this and will not take American breeders seriously."

Maryanna lists Doctor Wendell MF and Selten HW (Danish Olympic team horse at the 2016 Rio Games) as two examples of top horses that have been sold out of the country because their breeders could not get what was invested in them domestically.  "Unless you can show three or more at a time to prospective buyers, it is difficult to get anyone to come to the farm," she added.

Haymon's Marydell Farm breeds for temperament first, then conformation and then gaits. 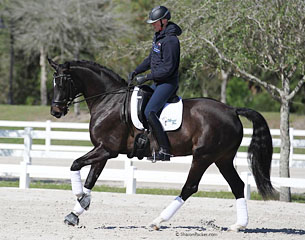 "Our goal is an amateur friendly mind in an athlete for the Grand Prix. We do not target the Young Horse classes. Although we compete in them, we have found through observation, that only a small percentage of those horses do well at the Grand Prix," she said.

While Grand Prix level quality is the ultimate goal, Maryanna believes that rideability is of paramount important as the market consists of 90% amateur riders, who want a fun, safe and reliable horse for the future.

"I believe there are many Grand Prix horses on my farm, but I also can tell you not all are international quality," said Maryanna frankly. "I feel there are three levels of Grand Prix horses here on my farm: Those that will go to the Grand Prix with amateur riders, fulfilling the dream of their riders to be at Grand Prix but doing so at the regional and national levels. Those that with talented riders and owners with the financial backing can do the CDI Grand Prix and be somewhat competitive. Finally, those that I feel barring any accidents, illnesses and having the right owner with the funds to see the years of training and competitions, the correct start at a young age and appropriate training throughout - in other words luck - are the ones that will be Internationally competitive in the world." 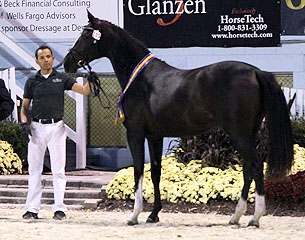 One of the stars in her collection is the 4-year old stallion Debonair MF (by Doctor Wendell MF out of elite mare Rising Star MF (by Rotspon)). "We believe could be better than his sire. This is from the coach/clinician that helped to train Doctor Wendell MF," Maryanna added.

Another top talent is the 5-year old mare Dansuse MF (by Don Principe out of elite mare Fürst Dancer (by Fürst Heinrich)), who was the Grand Champion at Dressage at Devon in 2014.

"She is being ridden by an up and coming rider, Anna Marek," said Haymon. "Plans are to partner with Anna on ownership so we can enjoy watching them develop as a team and enjoy the journey again as we did with Don Principe and Doctor Wendell MF. I also have a couple of three year olds that are very exciting and several youngsters, including two top Belantis colts out of a Don Principe x Rotspon mare that competed to PSG  level and a For Romance filly born this past May. Other than Dansuse MF, all are for sale."

Located 10 miles from the Tryon International Equestrian Center, Maryanna also holds an "open house" at her farm during competition evenings and doors are open to all.