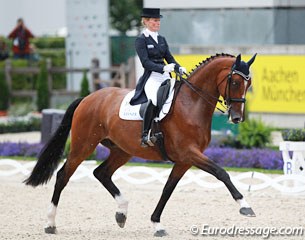 Suppenkasper was owned by Helen's husband Dr. David Lichtenberg and the horse had been for sale for the past half year. Sale to one of Patrik Kittel's Swedish students did not go through in the early spring of 2017, but now the bay gelding has been confirmed as sold to America.

Suppenkasper was bred in The Netherlands by Frans van der Poel and was originally named Danny Boy. He is by Spielberg out of Upanoeska (by Krack C x Juventus). In 2013 the talented bay gelding, then named Sir Lukas, made its show debut in Germany with Sarah Lukas in the saddle. She competed him from A-level up to Prix St Georges.

At the end of 2015 Helen Langehanenberg took over the ride and that is when the name of the horse changed from Sir Lukas to Suppenkasper to remove the connection with the previous rider. The new duo made their show debut in January 2016 and contested the developing Prix St Georges horse classes in Germany that year. They showed in the small tour at the 2016 CDIO Aachen and were sixth in the 2016 Nurnberger Burgpokal Finals in Frankfurt. 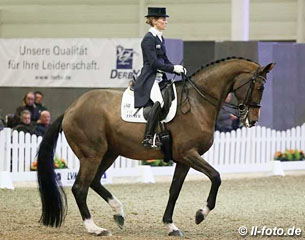 In 2017 Helen made the transition to the medium tour and at the 2017 CDI Dortmund at the beginning of March they did their first Intermediaire II in the national division. For a few months they didn't appear at shows (he was entered for the CDI Hagen in April but got withdrawn) as a sale was being negotiated. When the deal fell through, Helen and Suppenkasper made their CDI debut at the CDIO Compiegne where they won the Grand Prix and Special with 73.520% and 74.294%. At the CDI Cappeln in July they won the Grand Prix and Kur with 70.580 and 75.975%.

Suppenkasper was one of Germany's most talent, up and coming Grand Prix horses. He will now continue his career under Steffen Peters.