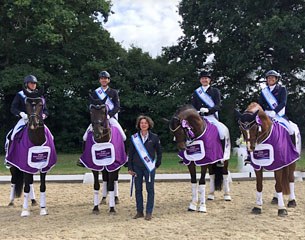 The French dressage team became the winners of the eighth and final leg of the 2017 FEI Nations' Cup series which was held in Hickstead, Great Britain, on 27 - 30 July 2017. With 424.811 points in total after three rounds, the French were able to stay ahead of the Dutch by a fraction of a point (424.053 pts). The U.S. team finished third with 421.920 points. However, the overall FEI Nations Cup series winners after eight legs (Sweden) has not been announced nor decorated in a prize giving ceremony.

The riders of all teams competed in the Grand Prix, which was won by French Pierra Volla on the Dutch mare Badinda Altena (by Tolando). Besting a field of 29 competitors, Volla scored 72.700% for the victory ahead of American Chase Hickok on the 18-year old Dutch bred Sagacious HF (by Welt Hit II) with 71.640%. Dutch Katja Gevers and her 17-year old Dutch gelding Thriller (by Gribaldi) were third with 70.900%.

Two riders per team were split up between the Special and the Kur to Music. Volla won the Special with 71.098% ahead of British Becky Moody on Carinsio (70.863%) and Hickok (70.843%). In the Kur to Music British Richard Davison and his home bred Bubblingh (by Lingh) topped the board with 74.180%, while Dutch Jean Rene Luijmes on Aswin (by Sandreo) were the runners-up with 73.040%.

The French team for Hickstead included Nicole Favereau, Ludovic Henry, Arnaud Serre and Pierre Volla, but MArie Emilie Bretenoux on Quartz of Jazz came along as an individual. She achieved such good scores that she captured a place on the French team for the 2017 European Championships in Gothenburg. Bretenoux earned 70.200% in the Grand Prix.

America finished third in Hickstead.  “I was very proud once again of our U.S. Nations Cup athletes here in Hickstead. Under extremely difficult weather conditions, our riders rode with class and did their very best,” said team captain Robert Dover. “Our goal this year was not to simply do well, which we did by winning in Rotterdam and placing second in Aachen, along with other results in the series, but to show off both our fabulous veterans as well as fresh, new human and equine faces. We are all very proud of our second-place finish in the series, the only nation to have supported every competition in it."

The final FEI Nations' Cup standing and overall winner of the series has not yet been announced. This year the FEI chose not to distribute press releases after each Nations' Cup leg, believing that the show organisation of each CDIO had sufficient media staff in place to produce their own articles. Out of eight legs only the Wellington and Aachen CDIO were able to produce PR's up to standard (in English and with sufficient information and photos). However to find out the provisional standing after each leg, interested parties had to navigate the FEI website instead of the results being communicated to the media.

On the FEI website, the official document can be found with the final standing of the series. Team Sweden has won the 2017 FEI Nations Cup Series with a total of 52 points, followed by the U.S.A. with 44 points and Denmark with 41 points. The U.S.A. was the only country out of eleven participating which had a team compting at all eight legs this year.