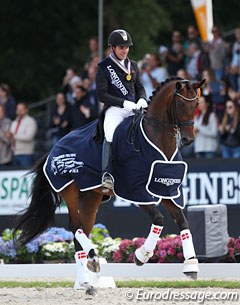 The Danish warmblood mare Fiontini has become a three-peat champion as she won the 7-year old Finals test at the 2017 World Championships for Young Dressage Horses in Ermelo, The Netherlands, on Saturday afternoon 5 August 2017. Winning the 5-, 6- and, and 7-year old World Champion's title three years in a row, Fiontini is the second horse to achieve this historic feat after Sezuan. The silver medal went to Sultan des Paluds, the bronze was for Kipling.

Despite featuring a group of 15 highly talented and high quality dressage horses, the 7-year old finals in Ermelo were quite lacklustre. Fiontini did not drop jaws as she did the years before, and overall the ranking was very predictible with the final ranking being almost the reverse order of the starting list. There was little thorough shifting done in this pack as the expected pattern was followed. While Fiontini certainly was the stand-out queen with her three-peat title (only two horses achieve this; also because the 7-year old Championship only exists since 2016!) she did not rein supreme with such dominance. Sultan des Paluds certainly was a lovely horse and witha solid test earned their marks, but the memorable horses of the day were certainly Kipling, L'Arbuste, and Zee Me Blue. 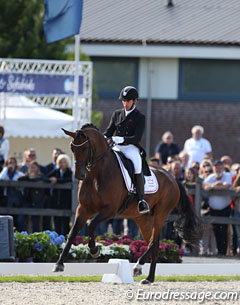 After convincingly winning the preliminary test, the Danish warmblood mare by Fassbinder x Romanov was the hot favourite for the title. Unless lightning would strike the arena, a tongue would flop out or be bitten, or a massive spook would make her jump out of the arena, there was little else standing in the way to the top step of the podium.

Bred by Hanne Lund and Henrik Hansen and sold last year to Swedish young rider Beata Söderberg, Fiontini impressed with her massive power in trot. In her basic gaits, the mare moves like an established Grand Prix horse with so much power, cadence and balance. The trot extensions were awe-inspiring despite a momentary loss of rhythm in the second diagonal. The extended walk had good relaxation but the collected walk could have been a bit more active. The left canter half pirouette was good, in the right one there was a loss of collection and impulsion. The mare is established in the flying changes, but the ones to the left are crooked and in the three tempi changes she was late in one change.  The fact that Fiontini was often tight in the neck and sometimes behind the vertical or tilting the head in the voltes took away some of the shine.

Spanish Severo Jurado Lopez and the Danish mare were undoubtedly top class and the judges' panel, consisting of Marietta Almasy, Maria Colliander, Sandy Philipps, and Dietrich Plewa, recognized the quality. Judge commentator Sharon Rhode praised the horse for its "ground cover," but the trot "bordered on passage. The rider must take care of that." The walk was a real highlight to them with its "clear 4-beat rhythm and showing real ability to collect in walk in the pirouettes." They lauded the horse for being "obedient and very well trained but there were a few small issues today." 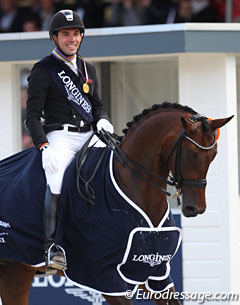 "It's amazing to do it three years in a row," said Jurado Lopez at the press conference. "Fiontini is always better in the ring than the warm-up. That's a dream for us as a rider. I'm lucky to have the chance to ride her for so long." The Spaniard, who works at Helgstrand Dressage, is unsure whether he will keep the ride in the future. "The owner is training with us. We are a team. Now we will decide what to do." With a barn full of world class horses at Helgstrand's, Severo shouldn't worry too much about his future. "I really would like to meet many Fiontini's in my life. I work in a stable where the quality is high. It's not impossible." 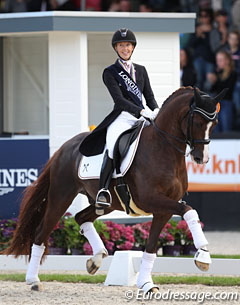 A decade ago Hans Peter Minderhoud was THE young horse rider of The Netherlands. The now Olympian has shifted his prime focus on Grand Prix horses and Kirsten Brouwer has become the one taken over the reputation of young horse specialist in Holland. Emmelie Scholtens enabled the transition but she has also moved on to upper level competition.  At the 2017 World Championships, Brouwer scored her fourth, consecutive medal. She already won gold once with Dancer (now a junior riders' horse in Germany) and then got more medals with Eye Catcher, and Five Star. The Hanoverian stallion Sultan des Paluds is her fourth medal winning horse.

The cute chestnut stallion is a like a long island ice tea: he has a little bit of everything. The Hanoverian branded stallion by Soliman de Hus x De Niro is bred and owned by Frenchman Pablo Bouillot from Elevage du Vieux Capeau in the south of France. He is ridden by Dutch Kirsten Brouwer and represented Germany (via the Hanoverian society) in Ermelo. The horse is not a newcomer to the World Championships. In 2015 he finished 17th in the 5-year old consolation finals under French Isabelle Pinto. 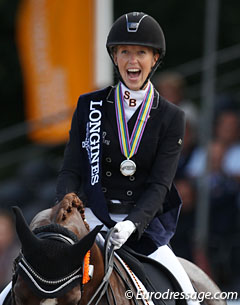 Brouwer and Sultan were third in the preliminary test and finished second in the Finals. His trot has much elasticity and spring with good flow and bending on the curved lines. The stallion sometimes came a bit too much up in the bridle and got wide behind in the extensions. He barely stretched into the contact when he was given the reins. The extended walk was outstanding, the collected was quite short in the beginning but then improved. The sweet horse showed promise in the collected movements but swung in the hindquarters in the flying changes. The canter extension was uphill, but needed to lengthen more in the frame.

Kipling is the Star of the Class 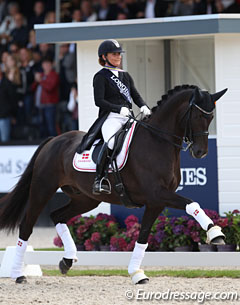 While Fiontini was the expected winner, Danish Anne Troensegaard became the star of the class aboard her Danish bred Trakehner gelding Kipling (by Hofrat x Hohenstein). Bred and owned by Peter Christensen, the black gelding is a compact, highly noble and elegant ladies horse with tons of pizzazz.

A Danish team member on Seduc at the 2010 World Equestrian Games, Troensegaard is coached by Rune Willum and she knows how to school horses! Kipling was a textbook example of a properly trained horse, even though the highly sensitive Trakehner was not really willing to stretch into the contact when given the rein. He was, however, cadenced and balanced in trot, elastic in the lateral movements. The gelding stood out with his massive freedom in the shoulder and spring which made him a real dancer. Never was there a loss of rhythm in the voltes and half passes. The extended walk did not have the best of ground cover, though, and the collected walk got slightly tense before the left turn on the haunches. The extended canter was very uphill, the left half pirouette off the diagonal but still well ridden, the right one was small but the horse lost some steam in them. The tempi changes were big, but Kipling got slightly tense in between the changes on the diagonal and there was one hiccup. 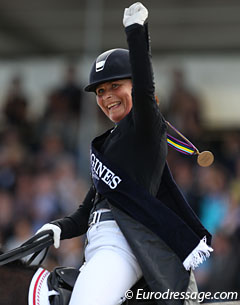 The judges praised the horse for its "expression and cadence. Collection come easily to this horse. The changes could be more fluent." They rewarded the bouncy Kipling with 9.4 for trot, 8.4 for walk, 8.6 for canter, 8.8 for submission and 9.2 for general impression. The quality score was 88.8% and the technical mark 76.089%. Kipling totaled 82.445% and got bronze.

Troensegaard was probably the happiest rider of the day. While Jurado Lopez and Brouwer both smiled and were grateful for their medals, Troensegaard was in fact the one in tears, bouncing around in joy. It was endearing to watch!.

"He got a little bit excited on Thursday when it sounded like the arena would collapse with the wind," said Anne about her run in Ermelo. "It's my first medal. It's a good feeling. We can get used it."

First Apple in a Snaffle 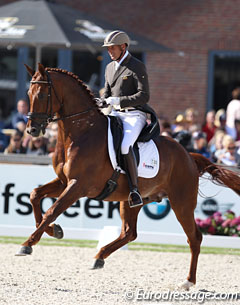 For the 7-year old division, riders have the choice to compete in a snaffle or double bridle. Dutch Patrick van der Meer was the only one to opt for a snaffle in the Finals. Aboard Carolyn de Roo's Dutch warmblood stallion First Apple (by Vivaldi x Partout, Van der Meer rode his horse in a very fluent, unpressured way.

He began with a perfect halt at entry (while many other horses stood in a square, but stretched halt). First Apple flowed in trot even though the horse could have been a bit more closed and collected in the frame. The extended walk was ground covering but the collected a bit too open and free. First Apple has a powerful canter with big flying changes but the balance in the collected movements was still a bit unsettled. This young developing Prix St Georges horse showed plenty of promise. The contact needed to be a bit more steady. While the stretching out was done exemplary, coming back into a more closed frame did not always go without effort. The chestnut scored 8.8 for trot and canter, 8.5 for walk and submission, and 9 for general impression. With 87.20% for quality and 74.166% for technical execution he finished just off the podium with 80.683%.

One of the real eye catchers of the day was the Danish warmblood licensed stallion Zee Me Blue (by Zack x Don Schufro). Bred by Stald Ringbo and owned by Blue Hors, Zee Me Blue was the licensing champion as a 3-year old but then did not return to the spotlight as a youngster. Now trained and ridden by Daniel Bachmann the horse has come a long way and showed star quality. 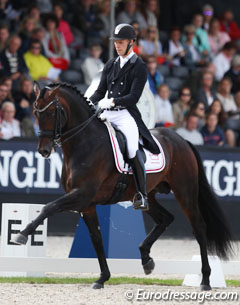 His test also began with a perfect halt at entry. The trot was outstanding with an incredibly elegant front leg, massive shoulder freedom, and tons of balance on the curved lines and in the lateral movements. The trot extensions were so lightfooted. Sometimes the trot work came across as a little produced. In canter the horse showed much uphill tendency in the extensions. The horse has much ability to collect but the maturity is not there yet (logical!). He got a bit stuck in the pirouettes and also in the final tempi changes every three strides, he lost the forward motion in the change.

Still, Zee Me Blue is a wonderful horse and definitely one to watch in the future. The judges gave him 9.5 for trot, 7.5 for walk, 8.3 for canter, 8 for submission and 9 for general impression. He scored 84.60% for quality and 75.513% for technical execution. With 80.056% this stallion completed the top five in the 7-year old finals.

Eurodressage's Astrid Appels is on the scene taking photos at the 2017 World Young Horse Championships - If you are interested in prints or digital files for your social media, email us