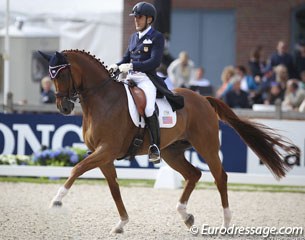 It was a weekend to remember for international dressage rider and trainer Dr. Cesar Parra and his exceptional young mount GK Don Cesar, who were the only horse-and-rider pair to represent the United States in the elite 2017 Longines FEI World Breeding Dressage Championships for Young Horses in Ermelo, The Netherlands.

Parra and the Westphalian gelding GK Don Cesar (by Desperados x Manhattan) breezed through the show’s Qualifier for 7-year-old horses with ease, scoring an impressive 72.909 percent. Despite the stormy and windy weather that added additional tension to the show atmosphere, Don Cesar made a great impression, with the announcer noting that their performance showed that they really belonged at the World Breeding Championship. The pair’s superior performance earned them a spot in the Small Final for 7-year-old horses.

In terms of supportive team members, Parra did not pack light for his trip across the Atlantic. Parra, founder and head trainer of Performance Farms dressage training business, was accompanied as usual by eyes on the ground Katie Riley and long-time groom Jennifer Mandracia of his Performance Farms team from Whitehouse Station, New Jersey and Wellington, Florida. The group also included GK Don Cesar’s owners - GK Elite Sport, Parra, and his wife Marcela Ortiz Parra. 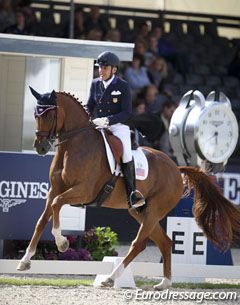 “What an incredible experience it has been in Ermelo! Both Don Cesar and I learned so much,” commented Parra. “I am extremely gratefuI and excited to go home and share all of this with my students. Thank you to everyone at US Equestrian for allowing Don Cesar to represent our great country.”

The 2017 Longines FEI World Breeding Dressage Championships for Young Horses kicked off on August 3 for Parra with his successful ride in the Qualifier for 7-year-olds. After the Small Final for 7-year-olds the following day, and the positive remarks from the judging panel, Parra was filled with pride for his chestnut partner. “Don Cesar proved that he is not only a top young horse, but he is also a fantastic future Grand Prix star. I absolutely love him,” said Parra.

The Olympian and Pan American Games Gold medalist was quick to thank his supporters throughout the event. “I’m so grateful to everyone at US Equestrian for the help and support in getting Don Cesar here. Thank you to our sponsor GK Elite Sport for making this trip possible, and to Dieter Laugks, and our sponsors Custom Saddlery, KEP Italia, Jose Alvarez Reitsport, Arenus, TheraPlate, ColdFlex, Skylands Saddlery, Mundo de Equitacion, ThinLine, and Total Comfort. I’m also thankful for my wife and awesome kids for being here to support me, my amazing groom Jennifer Mandracia, and all my staff running the barn at home - you are the best! And of course, a huge thank you to Mathieu Beckmann for introducing us to Don Cesar so many years ago as a foal. How exciting to witness how he is growing up!” 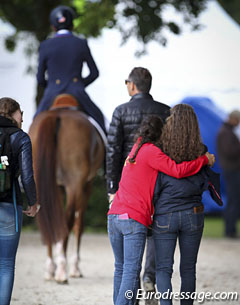 With yet another accomplishment under his belt as the only rider to represent the U.S. in the 2017 FEI World Breeding Dressage Championships for Young Horses, Parra is heading back to the states to plan for the next successful venture for Performance Farms. Parra’s history as an Olympian, Pan American Games Team Gold medalist, two-time World Cup Finalist, three-time World Dressage Championships competitor, Nations Cup Silver medalist, and two-time World Equestrian Games competitor has made him an invaluable trainer to both the horses and the riders on his team.

Parra has been riding Don Cesar for the past two years, in which time they have earned the silver medal at the U.S. Young Horse Championships in the 6-year old division and raked in blue ribbons in 7-year-old classes in Florida’s competitive 2017 Adequan Global Dressage Festival.

To follow Parra’s internationally competitive dressage journey and to learn more about the training and lessons he offers, visit the Performance Farms official Facebook page and the official website at www.Piaffe-Performance.com.