Germany on Cruise Control to Gold at 2017 European Dressage Championships 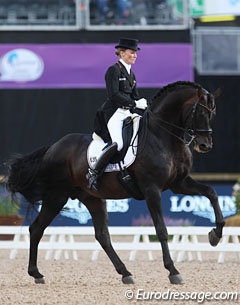 The German team is on cruise control to gold at the 2017 European Dressage Championships, which kicked off in Gothenburg, Sweden, on Tuesday 22 August 2017 with the first group of riders competing in the Grand Prix. Helen Langehanenberg trail blazed the path for Germany and is currently standing first in the provisional ranking.

As fourth rider on the German team, Helen Langehanenberg and Louise Leatherdale's 15-year old Hanoverian licensed stallion was the strongest scorer for Germany today with a 74.986% score. Langehanenberg earned her spot on the German team with a gutsy Grand Prix at the CDIO Aachen in July, but today in Gothenburg her stallion by Dressage Royal x Ritual was not as fresh and sharp on the aids as in Aachen, but still produced a more than solid round.

The dark bay stallion showed much ground cover in the trot extensions, but he had his mouth open in the half passes. The passage started out with a few double beats but the regularity improved along the way. The piaffes were on the spot and with good lift in the legs, but they required considerable spurring from the rider to keep the horse going. The extended walk was active and dynamic. The two tempi changes were uphill but the horse could have been more forward. The extended canter was uphill, the ones correct but the ground cover should improve. The zig zag was very well ridden, as were the pirouettes. 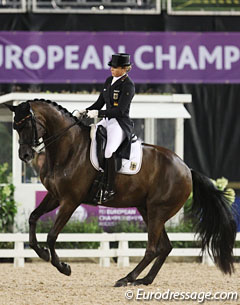 Right on Helen's heels was team mate Dorothee Schneider on Matthias Herbert's Bavarian bred Sammy Davis Jr (by San Remo x Wenckstern). The dark bay gelding is still quite green at Grand Prix but shows such a positive attitude and willingness to work, with his ears pricked. As last pair to go on Tuesday, riding under floodlight at 9 PM, Schneider and Sammy Davis Jr. executed big trot lengthenings, but in the half passes the one to the left was less elastic.  The passage is elegant and lightfooted and the piaffe has good sit, but the green Grand Prix horse is not yet very secure and steady in the rhythm, getting wide behind at times and struggling with the second piaffe-passage transition out. The extended walk was mediocre, lacking clear long marching and with just enough overstep. The tempi changes were uphill and straight. The left pirouette was the best one of the two with the most sit. At all times the horse was soft and light in the contact but the mouth could be more closed at times. They scored 74.586% to finish second provisionally. Schneider's scores ranged from 72.300 to 75.500%. 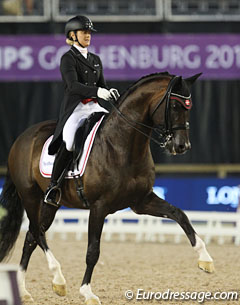 Danish Anna Zibrandtsen and the 12-year old Dutch warmblood stallion Arlando (by Paddox x Mytens xx) are currently standing in third place with 72.957%. Four riders scored in the 72% range today, which kept the pack closely together. Zibrandtsen rode a very concentrated test with a steady, quiet contact. The gorgeous Arlando is a very pretty, bouncy mover with a superb passage, but he fails to fulfill any type of lengthening. The trot extensions have no overtrack and only leg flash in front, the walk is poor in rhythm with no overstep. The first piaffe was not as secure in the rhythm and in the third piaffe at X the horse got wide in front and behind. The passage on the centerline was exceptional though, as were the trot half passes. There was a mistake in the two tempi changes, but the ones worked.

Homeside hero Tinne Vilhelmson-Silfven and Antonia Ax:son Johnson's 14-year old Swedish warmblood Paridon Magi (by Don Primero x Napoleon) landed fourth place with 72.857%. The bay gelding has a lovely silhouette in passage and the uphill tempi changes were a highlight. Vilhelmson steered the horse round with so much routine and expertise. Paridon Magi had some issues today in the piaffe. In the first he stepped on his own hindlegs, in the second he was quite forward. The left pirouette was the best one and the zig zag was very well executed. Paridon Magi ran out of steam in passage on the final centerline and got a bit against the hand as Tinne rode him towards X, but overall the test was nice. 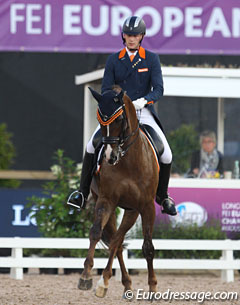 Dutch Diederik van Silfhout completed the provisional top five with a 72.529% earning ride on the German-Dutch owned Westfalian gelding Four Seasons (by Furst Piccolo x Mon Cheri). The chestnut gelding has made a tremendous development this 2017 show season and Van Silfhout shows fine riding by keeping a very quiet hand, even though the right curb was more on and the horse not always entirely through (this was obvious in the unsteady head position on the final passage centerline). The horse showed excellent trot extensions and a good right half pass, the left one was less elastic. In the first passage Four Seasons could carry more from behind, the first piaffe was safe in the rhythm. Unfortunately the extended walk did not happen at all: no overstep, no stretch over the topline. The collected walk was tense. The uphill and very straight tempi changes were a highlight.

Emile Faurie was the only Brit to go today after Gareth Hughes' withdrawal as Don Carissimo sustained an injury in Gothenburg. Aboard Elena Knyaginicheva's Hanoverian gelding Lollipop (by Lord Sinclair x Welt Hit I), the British Olympian showed that he has a very talented horse to ride. Although 13-years old, Lollipop is still quite inexperienced at international top level and the cute bay got hectic in several movements. The passage, however, was fantastic with incredible power and bounce. Also in piaffe the gelding has much scope and suspension but the rhythm needs to be more secure. Also in the canter work all the ingredients are there, but the horse needs to find more self-confidence and security in it. They scored 72.286%. 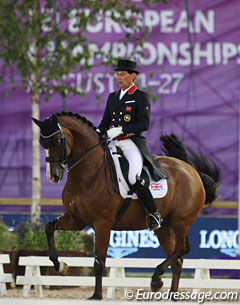 The 2017 European Dressage Championships are hosted in the Ullevi soccer and athletics stadium. While it definitely creates an immediate Championship feel, the capacity of the stadium is too optimistic for the stay-at-home dressage crowds. With empty seats everywhere, the good weather could not brighten the empty feeling. Still, the organisation has done its best to set the tone and with the weekend approaching and the Championships coming into full swing, more can be expected.

Text and Photos by Astrid Appels - No reproduction allowed