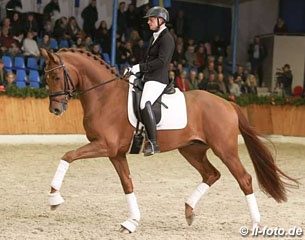 Co-owner Joop van Uytert announced on Facebook that Furst Jazz is in training with Diederik van Silfhout in The Netherlands in preparation of the KWPN Stallion Competition circuit, through which the chestnut can be considered for approval with KWPN.

Furst Jazz is bred by Pegasus Stables in The Netherlands, and owned by Paul Schockemohle in partnership with Dutch stallion owner Van Uytert.

He is by Furst Romancier out of Borendy (by Painted Black x Jazz). He was originally named Inverness P, but got a German name as he was not licensed with the KWPN society but got widely approved in Germany with the Westfalian, Oldenburg and Hanoverian studbook.

In an interview with De Hoefslag, van Uytert further explained the reason of the horse's move to Holland: "At the stallion testing in Munster-Handorf (sic) this spring he didn't really stand out. He was afraid of the other horses, so his score got stuck at 7.8. At Schockemohle they don't care about that, because they believe in him and believe that his time will come. In Germany they don't do much with the horses in winter, so the idea arose to bring the stallion here. Here he can be trainer further. I believe he needed a top class rider and then you quickly think of Diederik."