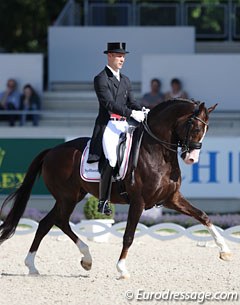 The Dutch warmblood stallion Don Olymbrio L has been proclaimed an elite stallion by the Danish Warmblood society as the 9-year old licensed fulfilled all the criteria to received the elite status.

Don Olymbrio P is bred by Jan Lamers in The Netherlands and is by Jazz out of Olymbria (by Ferro). He was purchased by Blue Hors stud in Denmark in a private transaction at the 2011 KWPN Stallion Licensing.

Don Olymbrio received the elite status because he has been trained and competed at S-level. Under Daniel Bachmann he is currently being shown at international Grand Prix level. He was short listed for the Danish team selection for the 2017 European Championships.

He has a dressage index of 129 points based on 50 offspring that are competing in Denmark. The most successful are Risbjergs Olympia, Hønnerups Lidell, Uno Don Olympic, and Grevens Ladonna.