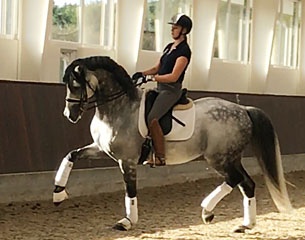 Lancelot is a 2005 born stallion bred by Werner Behrens in Germany. He is by the show jumping sire Lordanos out of Ginastera (by Ginsberg x Dynamo). He was acquired by the Danish based Norwegian company Tailormade horses and that is how he got the suffix in front of his name.

The grey stallion has only been very lightly competed in Denmark. Under Silje Bakken, he began his show career as a 4-year old in 2009 and won bronze at the Danish Young Horse Championships. In 2010 he was selected to represent Norway at the World Young Horse Championships but he did not compete there. In 2011 the horse did not compete at all and in 2012 he did only one show. In 2013 Bakken rode him at M-level in Denmark in two shows, in 2014 only one and in 2015 they didn't compete.

In 2016 Lancelot moved to Andreas Helgstrand's yard to be sold. Under stable jockey Kenneth Damgaard he was campaigned a bit more at Intermediaire II level. The pair's last competition was in August 2017 in a regional show, where they scored 69.474% in the Inter II. 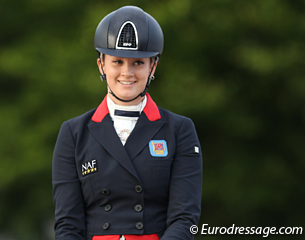 Ellen McCarthy is a member of the British Young Rider team. With Donna Summer she competed at the 2017 European Young Riders Championships and placed 15th in the Kur to Music finals.  McCarthy is currently based in Germany with Helen Langehanenberg.