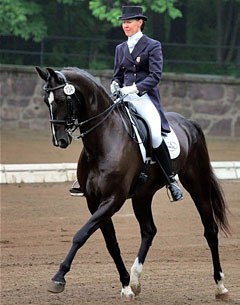 "This year I made the decision to not compete seriously again," Bredahl announced. "It was a hard decision because I have some wonderful horses. I know it is the right decision, because I absolutely love coaching and helping riders."

"Of the 42 horses I showed, 17 of them were at the FEI level and 5 at Grand Prix. 4 of them won 8 USDF Horse of the Year titles. 10 of them I owned myself," said Bredahl. "Three of them I still own. Every single horse taught me something, including patience and persistence. Not many sports where you can compete for 37 years and still be completely immersed and still be learning."

Her career highlights include two U.S. team bronze medals. She was a U.S. Olympic team rider on Monsieur at the 1992 Olympics in Barcelona, Spain, where she won team bronze. She went on to earn a Team Silver medal from the 1997 North American Championship with Lugano.

Since 2012, Bredahl was promoted as a 4* dressage judge. In 2014 she accepted the position of U.S. Dressage Assistant Youth Coach. Charlotte's last international show was in January 2016 at the CDI-W Burbank, where she competed Hamilton at small tour level.

"I feel so lucky to be looking forward to every day I get to work with horses and riders. I also feel incredibly lucky to belong to our very special dressage family," she said.