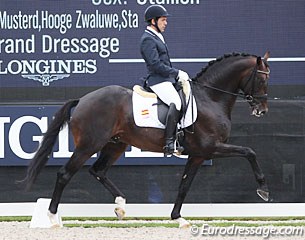 Danish and Dutch horse dealers Andreas Helgstrand and Nico Witte have sold the 7-year old KWPN licensed stallion Franklin to an unidentified group of foreign investors. The stallion will remain with Helgstrand in Denmark.

"About seven weeks ago a client came to Andreas and asked him if he didn't have an interesting investement for himself and a group of investors," Dutch co-owner Nico Witte told Eurodressage. "Franklin is a special stallion who is very popular with the breeders, so he covers a large amount of mares. This fit the desires of the investors. As the offer the investors made corresponded with our asking price, Andreas and I agreed to accept it." 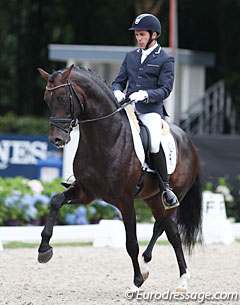 In 2017 Franklin did not compete at all. He did his last show in Denmark in October 2016, finishing sixth in the 2016 Danish Young Horse Championships.

The dark bay stallion has been a very popular breeding stallion with over 400 coverings this year. In 2017 numerous of his foals sold for top auction prices. Originally the plan was for Franklin to return to Holland in 2018 to become Madeleine Witte-Vrees' ride, but the horse has now been sold to a foreign investors' group, of which the members want to stay anonimous. Their nationality has not been revealed either.