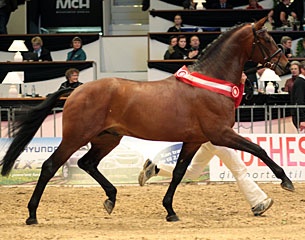 The 2009 Danish Warmblood licensing champion stallion L'Espoir (by Lord Loxley x Warkant) has been sold by Paul Schockemoehle to Jennifer Gilchrist as a breeding stallion for her Scottish based Romanno Stud.

Bred by Marlene Hubert Smith in Germany, L'Espoir was initially the 2008 reserve champion at the Mecklenburg stallion licensing before he went onto being the 2009 Danish Warmblood licensing champion. In his 35-day test he achieved the then highest ever score of 944 gaining 3 perfect 10's and no score less than a 9.

Karina Christiansen, the Danish breeding director described L'Espoir as "he prototype of the future dressage horse. He moves uphill all the time with swing and elasticity".  The judges at Redefin described him as a "miracle mover - when he trotted through the indoor arena every part of his body was in motion. He has an energetic leg action with fluent movement through the back". 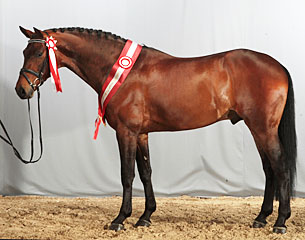 In 2012 the German Olympic bronze medalist Heike Kemmer took the ride of L'Espoir, where he was successfully competed to Prix St Georges-Intermediaire I level.

His sire Lord Loxley was a former Bundeschampion and vice world champion and the dam's sire Warkant was the Hanoverian Stallion of the Year in 2002.

From the outset L'Espoir's offspring were beautiful types that moved with outstanding cadence and have wonderful characters.  Several have fetched the top prices at auctions including Lord Schufro (220,000 euro), Loui (55,000 euro), L'Equipe (33,000 euro) and Thybo's Laban (29,500 euro).  His breeding index in 2017 was 152 points. 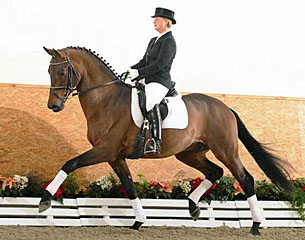 L'Espoir has joined Jennifer's family run stud and stands alongside her other resident stallions Hochadel (by Hohenstein x Donnerhall) who was formerly based at the German State stud in Celle and her foundation breeding stallion Rubin Star N (by Rubinstein x Ramiro), who at 26 years of age is now retired from public stud, but he still successfully covers Gilchrist's own mares.

"I'm very excited to have purchased L'Espoir," Gilchrist stated. "He is a wonderful addition to our breeding program, as he introduces new blood into the stud. He will be a good outcross to our mare gene."