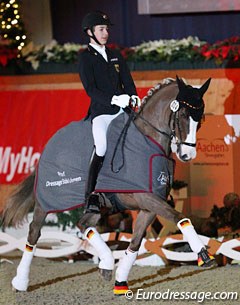 German Moritz Treffinger and his mare Top Queen H were on song in the FEI pony team championship test at the inaugural 2017 CDI-PJYR Aachen on Friday 24 November 2017. The "Aachen Youngstars" competition is a brand new international indoor competition on the FEI calendar and attracted a decent field of German riders with some Dutchmen, Danes, Brits, Italians, Swedes, Hungarians, Russians and Belgians thrown into the mix.

Taking the massive success of the Roosendaal Indoor competition the first weekend of December into account, the Aachen show organizers decided to stage their own version of a Christmas winter indoor event in the lead up to the new year. Many new combinations presented itself and the Aachen show was a good event to gauge what lies in store in 2018. Unfortunately several cheeky ponies took the opportunity to let their riders down and spook from the plethora of Christmas decorations surrounding the arena. 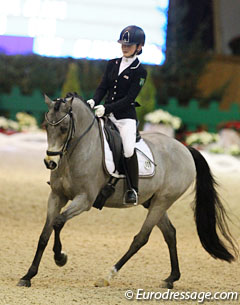 Moritz Treffiner's 9-year old Top Queen H (by Top Anthony II x Dark Rubin) was unfazed by the glitter and glam and convinced judges Hamoen, Almasy, Lehrmann of their talent and potential as a strong German team candidate next year. The 14-year old Treffinger rode a very consistent test with an excellent trot half pass, but there was some lack in bending on the half voltes. The extended walk was ground covering and active and the canter work was ridden with much focus and control. They scored 74.060% for the victory.

Two weeks after winning the 2017 German Developing FEI Pony Rider Championships in Verden, the Hamminkeln based Johanna Kullmann proved she is ready for the big FEI pony league division on her routinier Champ of Class, a 13-year old Rhinelander bred gelding by Champion de Luxe x Dornik B. The collected trot on the left lead was still a bit hurried as well as the extensions, but the extended walk was very good. The canter work looked secure but could score even higher with more collection. They earned 73.120%. 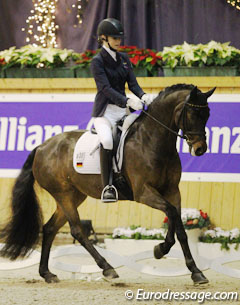 Laura Franziska Riegel and the 14-year old Weser Ems bred Cinderella M (by Constantin x Donnerhall) landed third place. Back in the 2000s the dark bay Cinderella was one of Germany's most talented dressage ponies and represented Germany at the 2009 European Championships in Moorsele under Grete Linnemann. After that Cinderella M disappeared from the international scene with an injury sidelining the pony. Since then she has had several different riders campaigning her (Sophie Kampmann, Jacob Schenk, Eileen Henglein). Now back in the CDI spotlight under Riegel, Cinderella M excels with her outstanding canter. Although she has lost some muscle and shine, she still does an admirable job as schoolmaster pony. The walk was well regulated but there needed to be more activity in the turns on the haunches. The extended walk had good overtrack but was not the purest in rhythm. The canter work was spectacularly uphill and it's a pity that the trot tour could not boast the same amount of suspension. Nevertheless the pair rode a solid test and scored 71.880%. 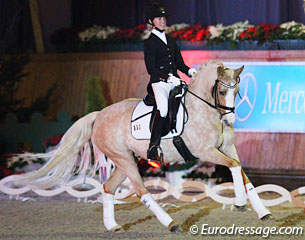 New comer in a small package, Greta Simon and the 9-year old Rhinelander palomino mare Deine Maid P (by Dior de Luxe x Derbino) firmly stood their ground and made an impression. Although the pony is slightly built down hill, she does have good lift in the withers in canter and was presented in a lovely way by Simon. The extended walk was wonderful, but trot extension hurried. They scored 71.581% to finish fourth.

The highest scoring non-German rider was Dutch pony team member Micky Schelstraete on the 15-year old Hanoverian bred Elin's Noncisdador (by Nostradamus x LP Nixen) in fifth place. The pair garnered points in the canter tour, but in trot the grey stallion could have been even more quiet in the head position and the trot extensions were irregular in the rhythm. The extended walk was outstanding. They scored 70.769%.

Eurodressage was on the scene taking photos. If you are interested in ordering prints or digital files for Facebook/instagram, please send us your name and we will mail you the proofs of the photos for you to choose from.